Ignoring industry leaders and human rights and environmental organisations, ship owners continue to profit from dangerous and dirty shipbreaking practices on South Asian beaches in 2015, according to new data released today by the NGO Shipbreaking Platform. 768 large ocean-going vessels were sold to the scrap yards last year. 469 were broken on the beaches of India, Pakistan and Bangladesh where shipbreaking yards do not provide fundamental labour rights, ignore international waste trade law, and fail to respect international environmental protection standards.

One of many accidents that killed or maimed shipbreaking workers last year was a major gas explosion at Shitol Enterprise, a shipbreaking yard in Bangladesh. A gas cylinder burst killed four workers immediately and severely injured another four. The vessel they were breaking was sold to Shitol Enterprise by the Greek shipping company Universal Ship Management Corporation, and sailed under the flag of St. Kitts and Nevis, a typical low-cost, end-of-life flag of convenience. Greek owners by far outstripped ship owners of other nationalities by having sold the most end-of-life vessels to dirty and dangerous shipbreaking sites in South Asia, and for the first time in many years, Bangladesh was the world’s number one destination for scrap ships. 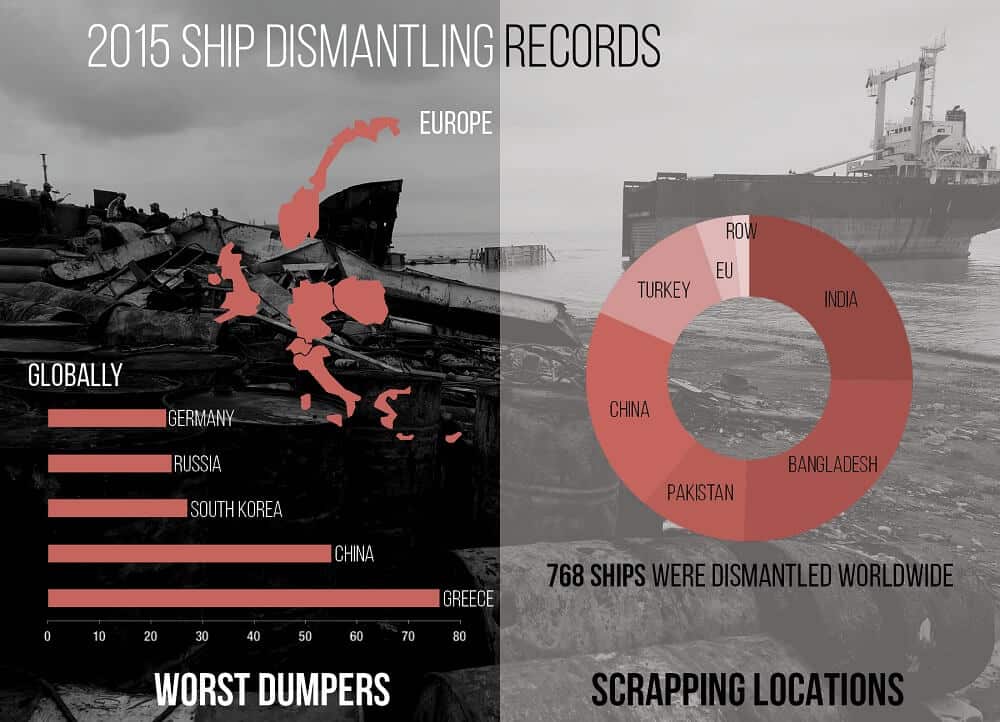 “Despite a lot of international attention on the problems of shipbreaking on the beaches of South Asia, the statistics for 2015 show that the vast majority of ship owners have not changed their practice for the better. On the contrary, most have opted for one of the worst shipbreaking destination in the world – Bangladesh, where children are still illegally exploited to break ships manually on tidal mudflats”, said Patrizia Heidegger, NGO Shipbreaking Platform Director. [1]

Ship owners sell their vessels to South Asian yards via cash-buyers, companies that specialise in the trade of end-of-life tonnage. Cash-buyers promise ship owners not only the highest price, but also to rid them of their responsibility to properly deal with the end-of-life management of their ships. [2] Ships contain large amounts of toxic materials such as oil sludge, asbestos and paints laden with heavy metals and would yield less profit at end-of-life if sold to a recycling facility that firmly follows environmental and occupational health and safety standards.

One sign of hope, is a group of leading ship owners that have vowed to take responsibility for clean and safe end-of-life management and demonstrate that alternatives are available. The European Union is also expected to publish a list of approved ship recycling facilities worldwide by the end of 2016. This will satisfy the call from those that demand better practices, including investors such as ABN-Amro and cargo owners such as H&M, Stora Enso and Phillips – none of whom wish to be associated with polluting and harmful end-of-life management of old ships. While, only vessels sailing under an EU flag will be legally obliged to use an EU approved recycling facility, any ship owner can nevertheless opt for an EU approved facility for its non-EU flagged ships on a voluntary basis. The NGO Shipbreaking Platform therefore demands that shipping companies and their investors only allow their vessels to go to yards listed on the EU list. Moreover, governments of the world’s leading maritime nations, such as Greece and Germany, must likewise take steps to ensure national use of the EU list. Introducing a financial incentive based on the polluter pays principle would go a far way in pushing irresponsible ship owners towards sustainable ship recycling.