How’s this for a challenge: Retrofit a marine diesel engine to dual fuel operation in the hull of a ship without altering the vessel’s structure, limiting any onboard operations or requiring the ship to dock. Sound impossible? Not for gas shipping company Anthony Veder and a team of Dutch partners, including MaK dealer Bolier, who teamed up to accomplish this industry-first feat last December. Even more impressive? It took less than five weeks.

The conversion took place aboard the Coral Anthelia, a carrier vessel that transports ethylene and liquid natural gas (LNG) primarily in northwestern Europe.

“LNG as a cargo creates a natural boil-off gas,” says Frans Juhrend, customer support project engineer at Bolier. “Anthony Veder wanted to find a solution to consume this gas and not release it into the environment. They decided to adapt the engine in order to consume the boil-off gas—hence the conversion to run on gas as fuel.” 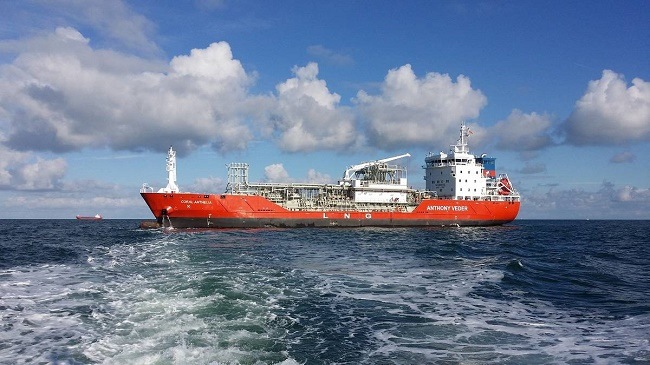 Anthony Veder wanted to install a dual fuel engine at the time of the ship’s construction, but the technology wasn’t quite ready. When it did become available, the company conducted an R&D project to compare in-hull and outside-the-hull retrofits, with the in-hull process emerging as the clear winner.

“The deadline was fixed, because commercial operation of the vessel in her new trade was set,” Juhrend says. “Meeting the timeframe was only possible due to a very efficient preparation phase.”

Key steps in that phase included pre-determining all the transport openings through which required components could be transferred, as well as laying out 90% of all necessary cabling on board the vessel before arrival at the shipyard. That allowed the conversion team to begin disassembling, then rebuilding, the engine immediately.

Overall planning and operation were performed by Anthony Veder in close cooperation with partners from Bolier, Damen Shiprepair Rotterdam (Van Brink shipyard), Croon Elektrotechniek (electrical contractor), Leemberg (piping contractor) and Eekels (ship automation contractor). Despite the complexity, the team managed to execute the retrofit in less than five weeks. It helped that Caterpillar had strategically engineered the M 46 DF to allow for the retrofitting of current M 43 C engines. Synergies between the two platforms meant the in-hull conversion could occur without moving the engine block or performing extensive machining.

Today, the Coral Anthelia’s M 46 DF engine can run on LNG, marine diesel oil and heavy fuel oil—reaching industry-leading efficiency in gas mode. Using LNG eliminates the emission of sulfur and particulate matter and reduces emissions of NOx and CO2 by 90% and 20%, respectively.

“Docking a vessel is costly, so not requiring the Coral Anthelia to go into dry dock was a significant cost savings,” Juhrend says. “The feedback from the customer has been very positive both on the conversion and on the new technology.”

While the Coral Anthelia’s retrofit was the marine industry’s first of its kind, Juhrend doesn’t believe it will be the last.

“The conversion from an existing diesel engine to dual fuel is mostly driven by either environmental, legislative or financial reasons,” he says. “For customers transporting LNG as cargo, such a conversion results in a win-win situation in all three areas.”