The Master of an oil tanker who says she was “just doing her job” has received the highest IMO bravery recognition for saving the lives of seven fishermen from a sinking fishing boat during a tumultuous storm in the Bay of Bengal in June 2015.

“It is every seafarer’s and Master’s solemn duty and obligation to save souls in distress at sea. I just did what a seafarer should do for a fellow soul in distress at sea. Yes, it was an instant decision, but not without assessing the risks involved. I just did my duty,” said Captain Radhika Menon, Master of the oil products tanker Sampurna Swarajya. 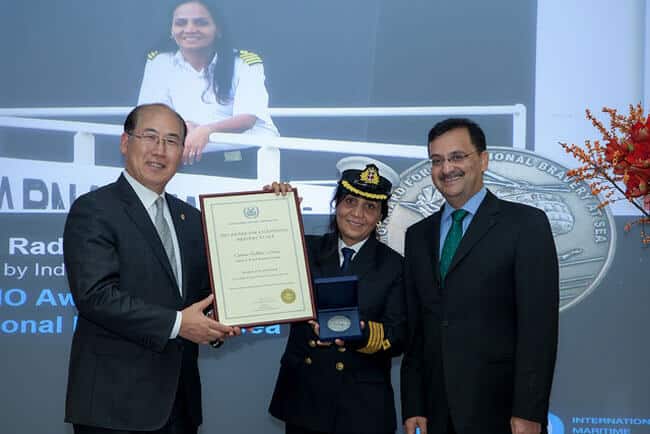 She was speaking after IMO Secretary-General Kitack Lim presented her with the 2016 IMO Award for Exceptional Bravery at Sea on Monday (21 November), during an emotional ceremony.

Captain Menon was nominated for the award by the Government of India, for her great determination and courage in leading the difficult rescue operation to save all seven fishermen from the fishing boat Durgamma. The boat was adrift following engine failure and loss of anchor in severe weather. Food and water had been washed away and they were surviving on ice from the cold storage. 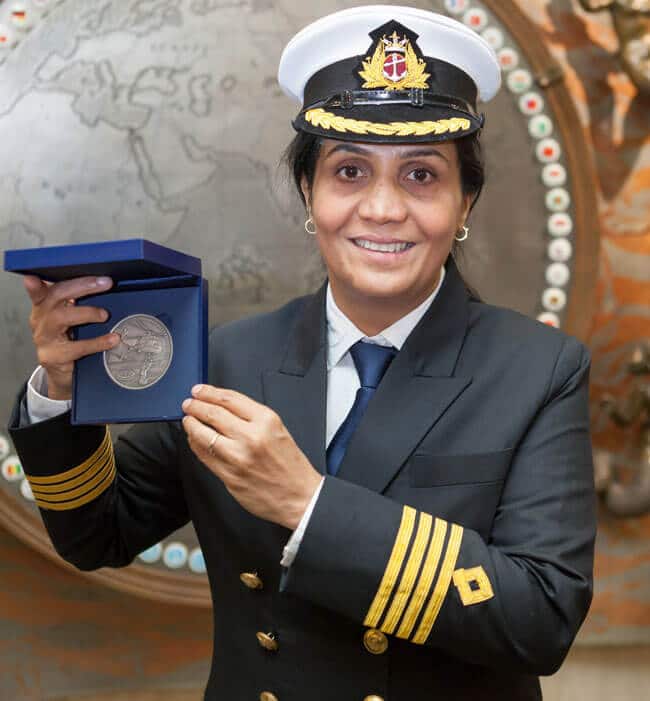 Through wave heights of more than 25 feet, winds of more than 60 knots and heavy rain, on 22 June 2015, the second officer on the Sampurna Swarajya spotted the boat 2.5 kilometres away, off the coast of Gopalpur, Orissa.

Captain Menon immediately ordered a rescue operation, utilising the pilot ladder and with life jackets and buoys on standby. It took three arduous attempts in the lashing wind and rain and heavy swells, before all seven weak and starving fishermen, aged from 15 to 50 years old, were brought to safety on board the ship.

Their families had already given them up for dead and were preparing for their funeral rites. But thanks to the rescue, led by Captain Menon, they were reunited with their loved ones a few days later. 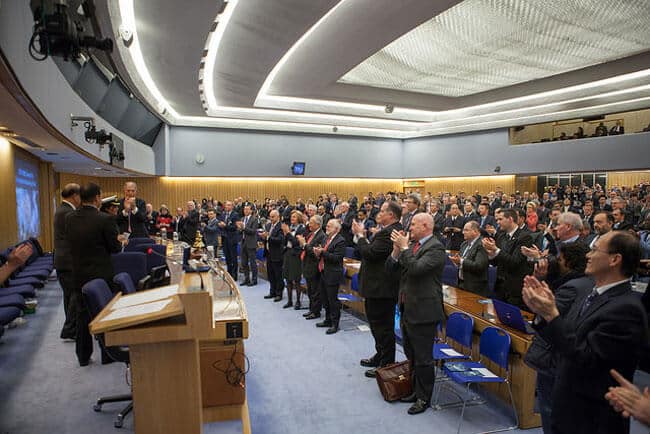 Rescued fisherman Dasari Danayya, speaking in his home town of Kakinada, Andhra Pradesh, said that without Captain Menon, they would not be alive.

“We could do nothing except wipe the tears from our eyes. Madam appeared as a goddess, and saved our lives,” he told The Shipping Corporation of India, in a video broadcast during the ceremony.

Captain Menon began her seafaring career as a radio officer and progressed to being a deck officer and later was appointed as Master of the Sampurna Swarajya.

During the award ceremony, certificates of commendation were also presented to the following:

Mr. Tang Shunjie, diving squad leader of the emergency response Dong Hai Rescue No.1 Flight Team of the Dong Hai Rescue Bureau. He was nominated by China for his tenacity and courage in rescuing the only survivor of a capsized fishing boat, who had been trapped in the engine-room for over 30 hours and was in a state of panic and unable to communicate. In complete darkness, rough seas and strong currents, Mr. Tang cleared the access of dangerous fishing nets and other floating objects and guided the fisherman to safety. Mr. Xie Hui, Chair of the IMO sub-Committee on Carriage of Cargoes and Containers and Director of the Maritime Safety Administration of the People’s Republic of China, received the certificate on behalf of Mr. Tang Shunjie.

Captain Hervé Lepage, Master of the containership CMA CGM Rossini. Captain Lepage was nominated by France for his tireless efforts to find and rescue, in adverse weather and sea conditions, two crew members of the capsized catamaran Lama-Lo. The survivors had been drifting in a tender for 26 hours when Captain Lepage located them by successfully estimating the drift of the beacon transmissions – before skilfully manoeuvring the ship alongside the tender and helping the crew members on board. Mr. Michael Parker, Chairman of CMA CGM Holdings UK and (from January 2016) non-executive chair of the UK Maritime and Coastguard Agency, received the certificate on his behalf.

Shri B.M. Das, Uttam Navik, winch operator and diver of the rescue helicopter CG 822 of the Indian Coast Guard Air Station Daman. He was nominated by India for rescuing all 14 crew members of the cargo ship M/V Coastal Pride, which was rolling heavily in rough seas and strong winds. Mr. Das helped six crew members get winched up to the helicopter and helped the others to abandon the sinking ship via the life raft. He himself was washed away, but managed to save himself and the crew before the vessel capsized and sank. Mr. Das was at the ceremony in London to receive his certificate.

Assistant Inspector Kang Seonggyu, Special Rescue Unit of the Republic of Korea Coast Guard. He was nominated by the Republic of Korea for his role in locating and rescuing a crew member confined in an engine-room air pocket of the capsized Chinese fishing vessel Noyounger 57189, after a previous Unit had helped to unblock the entrance but was unable to locate the survivor. After finding the crew member, Mr. Kang was able to stabilise his condition, before helping him to escape. Assistant Inspector Kang Seonggyu received his certificate during the ceremony.

Letters of commendation have been sent to:

The crew of the M/V Cosco Shanghai, nominated by China, for rescuing all 21 crew members of the sinking cargo ship Foxhound, who were found in a drifting lifeboat;

Captain O Yeong-tae, Master of the patrol vessel 3005, Republic of Korea Coast Guard, nominated by the Republic of Korea, for rescuing, during a heavy snow storm, all 17 crew of a Chinese fishing vessel which was on fire;

Mr. Kim Jaegu and Mr. Shin Jongyoon, firefighter rescuers of the patrol vessel 1506, Republic of Korea Coast Guard, nominated by the Republic of Korea, for their courage and calmness while fighting a fire just metres away from the fuel tank of the cargo vessel Platinum, averting a tragic marine pollution incident; and

This annual Award was established by IMO to provide international recognition for those who, at the risk of losing their own life, perform acts of exceptional bravery, displaying outstanding courage in attempting to save life at sea or in attempting to prevent or mitigate damage to the marine environment. For 2016, 23 nominations were received from nine Member States and one inter-governmental organization.