Captain Radhika Menon, Master of the oil products tanker Sampurna Swarajya, is to receive the 2016 IMO Award for Exceptional Bravery at Sea for her role in the dramatic rescue of seven fishermen from a sinking fishing boat in tumultuous seas.

The IMO Council, meeting for its 116th session in London, endorsed the decision of a Panel of Judges that Captain Menon displayed great determination and courage in leading the difficult rescue operation in the Bay of Bengal in June last year. 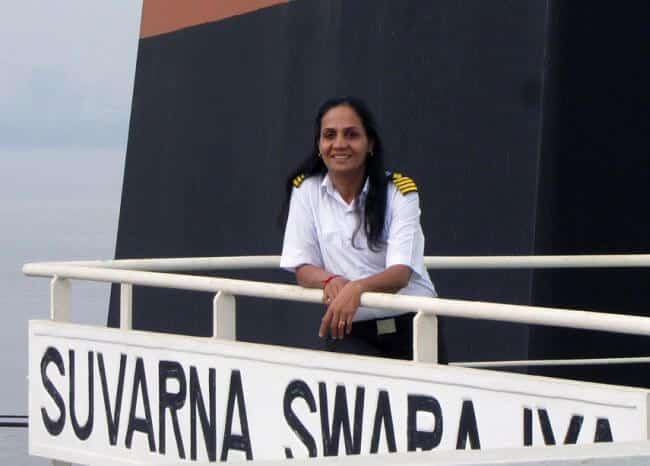 Captain Menon was nominated by the Government of India, for the rescue of all seven fishermen from the fishing boat Durgamma, which was adrift following engine failure and loss of anchor in severe weather. Food and water had been washed away and they were surviving on ice from the cold storage.

Through wave heights of more than 25 feet, winds of more than 60 knots and heavy rain, on 22 June, the second officer on the Sampurna Swarajya spotted the boat 2.5 kilometres away, off the coast of Gopalpur, Orissa.

Captain Menon immediately ordered a rescue operation, utilising the pilot ladder and with life jackets and buoys on standby. It took three arduous attempts in the lashing wind and rain and heavy swells before all seven weak and starving fishermen, aged from 15 to 50 years old, were brought to safety on board the ship. Their families had already considered them to be lost at sea, but thanks to the rescue, led by Captain Menon, they were reunited with their loved ones a few days later.

Ceremony for the 2016 IMO Award for Exceptional Bravery at Sea

The Awards ceremony is expected to take place at IMO Headquarters, on 21 November, at the end of the first day of the Maritime Safety Committee (MSC).

This annual Award was established by IMO to provide international recognition for those who, at the risk of losing their own life, perform acts of exceptional bravery, displaying outstanding courage in attempting to save life at sea or in attempting to prevent or mitigate damage to the marine environment.

Nominations are scrutinized by an Assessment Panel made up of members of non governmental organizations in consultative status with IMO, under the chairmanship of the Secretary-General. Subsequently, a Panel of Judges meets (under the chairmanship of the Chairman of the Council, with the participation of the Chairmen of the Maritime Safety Committee, the Marine Environment Protection Committee, the Legal Committee, the Technical Cooperation Committee and the Facilitation Committee) to consider the recommendations of the Assessment Panel and to select the recipient of the Award.

The recipient of the Award is invited to a special ceremony at IMO to receive a medal and a certificate citing the act of exceptional bravery performed.

There are three categories of honour: first, the Award itself, for the nominee judged to have performed the most outstanding act of bravery from among those described. Secondly, Certificates of Commendation are awarded to nominees who have committed acts of extraordinary bravery. And, thirdly, Letters of Commendation are sent to those nominees who are judged to deserve some special recognition for meritorious actions.