Narendra Modi, prime minister of India, on 19th May, visited Hyundai Heavy Industries (HHI) to seek increased partnership between Indian shipyards and HHI to ensure India’s shipbuilding industry can benefit from the shipbuilding expertise and experience of HHI. HHI is reported to be the only Korean company the Prime Minister visits during his two-day stay in Korea.

During the meeting held at the HHI headquarters in Ulsan, the prime minister and the HHI management discussed various ways to expand cooperation on naval defense, LNG carrier construction and shipbuilding technology. Prime Minister Modi has shown particular interest in HHI’s technological prowess in building a wide range of naval vessels as well as high value-added vessels such as LNG carriers. 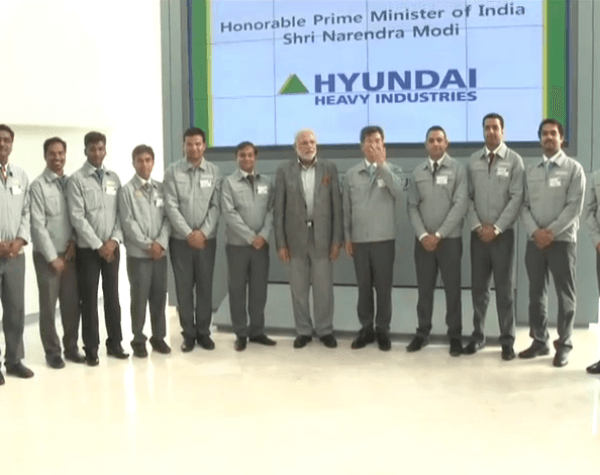 In the foreseeable future, India’s state-run gas company GAIL is likely to place an order of maximum 11 LNG carriers to haul LNG from the US to India for 20 years starting in 2017. Meanwhile, HHI recently signed an MOU with India-based engineering major Larson & Toubro on technological support for construction of LNG carriers. The visit of the Prime Minister this time is expected to cement the ties between HHI and its Indian counterpart.

HHI has undertaken a total of 30 offshore projects for India, beginning with the Mumbai offshore oil platform project in 1982. Also, the company has operated construction equipment production lines in Pune since 2008.