Indian navy’s frigate INS Betwa was restored to an upright position recently after it capsized in a dry dock in December last year.

The 3,800-tonne frontline naval warship had slipped off her dock blocks in Mumabi Naval Dockyard while undergoing a refit, killing two crew members and injuring 14 others. 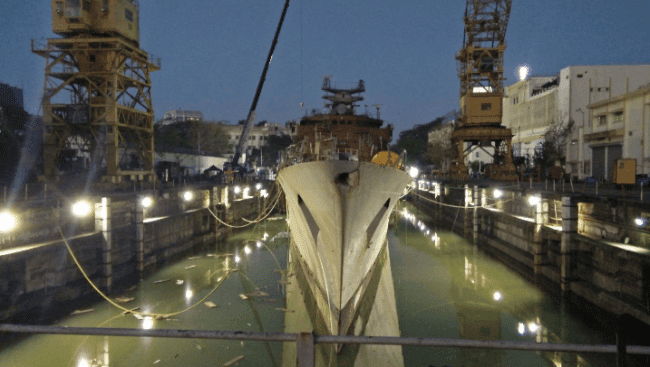 The US-based salvage company Resolve Marine Group successfully completed the salvage of the vessel by systematically flooding and pumping the compartments.

Reports said the US firm rolled the vessel upright without using any external lifting mechanisms.

The majority of the machinery had already been removed from the vessel as the ship was undergoing major refit and the Resolve-led crew was able to patch and repair all damages within two months.

The vessel, which was undergoing major refit and mid-life up-gradation since April last year, will now complete the refit by next year on scheduled date, the spokesperson added.

Entered service in July 2004, the warship met with the accident during undocking evolution, allegedly due to a failure in the dock-block mechanism. The mast of INS Betwa had hit the ground on the left side after the accident.