The Ministry of Shipping is organising a workshop titled ‘Promoting Coastal Shipping and Inland Navigation in India’ in Bhubaneswar today. This is the second in a series of workshops the Ministry plans to hold over the next 6-8 months to create awareness about the Sagarmala programme amongst the stake holders and to engage with them. The first such workshop was held on 9th June, 2017 in New Delhi under the theme ‘Accelerating Sagarmala Implementation – Engaging with States’

The main objective of tomorrow’s workshop in Bhubaneswar is to increase awareness about coastal shipping and inland navigation, with the purpose of increasing their modal share in the logistical modal mix from the current level of approximately 6 percent to about 12 percent by 2025 under Sagarmala 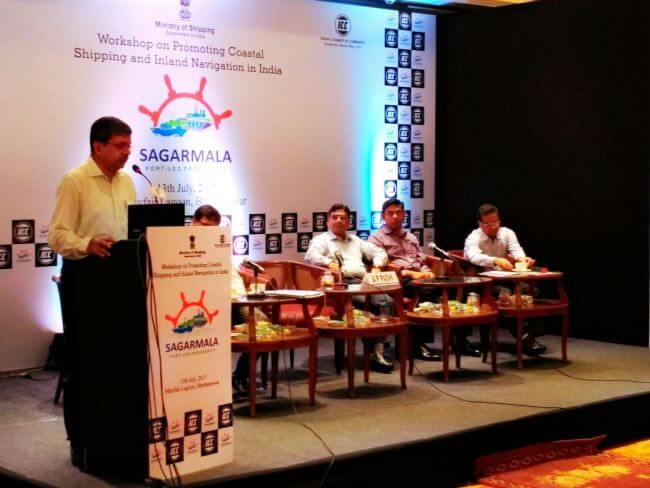 India’s 7500 kms of coastline and almost 14,000 kms of navigable rivers provide the perfect platform for the development of integrated water based transport system for domestic and EXIM freight as well as passenger transport.

In order to promote inland navigation, 111 inland waterways across 24 states have been declared as National Waterways (NWs) under the National Waterways Act, 2016. These will be developed and utilized as environment friendly and sustainable modes of transport.

National Waterway-5 covers the state of Odisha and a part of West Bengal. It runs a total length of 623 km of which 91 km is within West Bengal and the remaining 532 km is in Odisha. The stretches from Talcher to Dhamra on the Brahmani River is particularly very important as it will also serve the coalfields in Talcher and Ib Valley of Mahanadi Coalfields Limited (MCL).

Indian Port Rail Company Limited (IPRCL), a company under the Ministry of Shipping is also developing a heavy haul rail corridor from Talcher to Paradip. This will help to add 80 MTPA of thermal coal through shipping of coal from mines in Odisha to power plants in Southern and Western states through Paradip Port & Dhamra Ports.

The workshop will be inaugurated by the Sh. A. P. Padhi, Chief Secretary, Government of Odisha in the presence of Sh. Alok Srivastava, Special Secretary, Ministry of Shipping and will be attended by other officials from Ministry of Shipping, Major & Non-major Ports, Indian Port Rail Corporation Limited and other stakeholders.