The maiden coastal voyage of a vessel of Container Corporation of India (Concor) was flagged off by Shri Nitin Gadkari, Union Minister for Shipping,  Road Transport & Highways and Water Resources, River Development & Ganga Rejuvenation and Shri Piyush Goyal, Union Minister for Railways and Coal from Kandlathrough video link. CONCOR is a PSU under Ministry of Railways. The vesselSSL Mumbai is sailing from Kandla Port to Tuticorin via Mangalore and Cochin. This is a unique example of multi-modal logistics solution through integrated rail and coastal movement.  With this CONCOR will start a coastal movement of containers as a weekly service on this route, moving about 1400 containers. 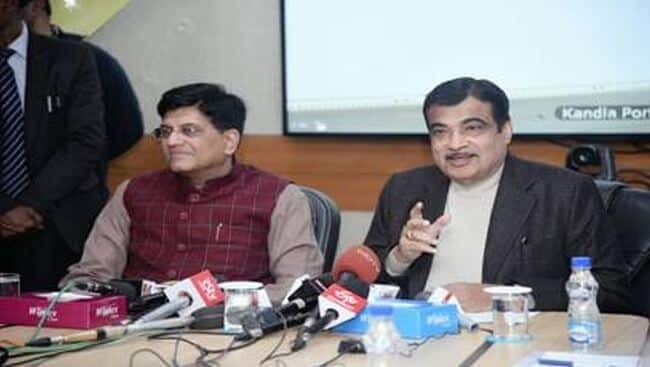 Speaking on the occasion Shri Nitin Gadkari called this a historical day for the transport sector in India and expressed confidence that this modal shift in the logistics chain was an important beginning that would help to bring down logistics costs and make Indian goods more competitive in the global markets in the very near future. India has huge potential for enhancing the modal share of coastal shipping and inland water navigation. The current share is only 7% unlike countries like China with 24% & Germany -11% ,  he said.

The Minister said the combination of railways and coastal shipping is a win-win situation for both modes of transport. It will release capacity for railways to carry others goods and facilitate more cost effective movement of commodities like steel, cement etc through coastal route, thereby enhancing the coastal trade basket

Shri Gadkari also said that besides being economical, coastal shipping is environmentally friendly and can result in 6% reduction in harmful chemicals and pollutants in India. With estimated diversion of about 5% cargo to coastal shipping, the reduced traffic on rail and road can result in saving of Rs. 230 billion. 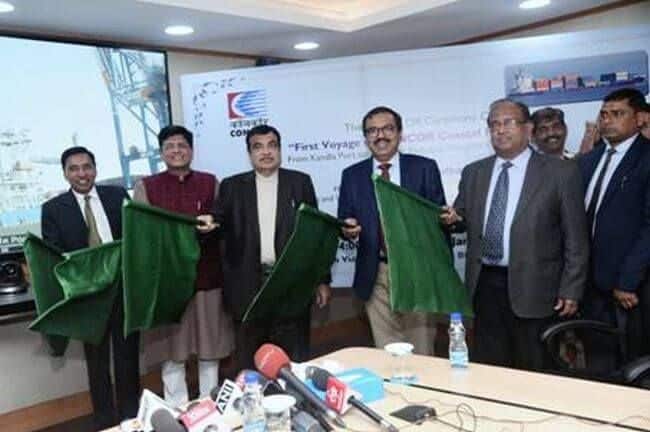 Urging CONCOR and other cargo transporters to utilize waterways and coastal shipping to enhance their business coefficient, Shri Gadkari  said that the network of waterways is growing fast in the country. We have declared 111 National Waterways. Work has already started on 11 waterways. With a new river port at Varanasi andmore coming up at Haldia, Sahibganj and Gazipur, and also dredging of Brahmaputra and Barak,goods can now be transported on rivers right uptoMyanmar via protocol route of inland waterways.

With the total potential to move 9 million tones of cargo, CONCOR is expected to move about 2700 containers per month in the first phase to Kandlafor onward carriage by coastal route to southern ports like Cochin.

Under Sagarmala, the flagship programme of Ministry of Shipping, coastal shipping is being promoted and aims to achieve 12 % share of coastal shipping & inland waterways in India’s overall modal mix by 2025. Relaxation of Cabotage law enabling foreign flag vessels to carry agri-commodities, fertilizers and containers between Indian ports; creation of coastal infrastructure at ports; simplification of documentation and procedures; and 40% discount on vessel and cargo related charges are some of the steps being taken to promote movement of coastal cargo. According to the National Perspective Plan of Sagarmala, a total potential of 320 MT per annum by 2025 of movement by coastal/inland waterways has been identified.

Speaking on the occasion, Shri PiyushGoyal congratulated CONCOR & Ministry of Shipping for this joint venture. He said, “Railways has introduced many new reforms in the last 4.5 years. This is another first in the series of reforms. For instance, we have stopped producing the old model of coaches and started producing only LHB coaches, to eventually replace all old coaches. We have targeted 100 percent electrification over the vast Indian Railways network. The joint efforts of the Ministry of Road and Railways have led to the inauguration of the Bogibeel bridge. The Rail University, having now been started, is preparing more than the 100 student for the transport sector. The new indigenous built Train 18, under Make in India initiative, will soon be flagged off on New Delhi Varanasi route. This new service started today by CONCOR will also be very profitable for the freight movement to send the goods to different locations in a cost effective manner and will also reduce the load on railways and road. When we strive for world-class logistics costs in India, joint efforts by road, rail and sea is required, only then the pace of development will be accelerated.”

Coronavirus: Delivery of World’s Largest Cruise Ship Delayed
Want to share your tips and advice? Got questions? Visit the community forum to ask questions, get answers, meet people, and share your tips!