As part of this ceremony, the Montreal Port Authority (MPA) reported another record year with close to 38 million tonnes of cargo handled in 2017, according to unaudited preliminary statistics.” 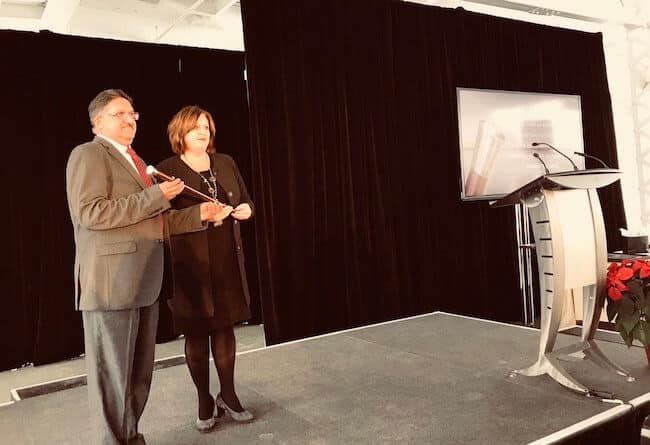 “I want to congratulate Captain Rakesh Kumar and the entire crew of the Ottawa Express, who braved the ice and cold on the St. Lawrence River to make it safely to their destination. The arrival of Captain Kumar and his container ship is a great reminder at the start of this new year that container handling is part of the Port of Montreal’s DNA and has been growing here for over 50 years,” said Ms. Vachon.

This event also let the MPA recognize the work of the Corporation of Mid St. Lawrence Pilots, Messrs. Alain Aubé and Gabriel Ross, who steered the ship safely to port. Every year, the Port of Montreal also likes to recognize the work of one of the artisans of the Gold-Headed Cane. This year, Ms. Vachon congratulated Urgence Marine Inc. for its contribution to the smooth functioning of port operations.

This great annual marine tradition brings together numerous representatives of the shipping industry and the Montreal business community along with key figures from the political and cultural sectors. This year, the Montreal Port Authority was honoured to have among its guests Ms. Alexandra Mendes, Member of Parliament for Brossard-Saint-Lambert, representing the Honourable Marc Garneau, Minister of Transport of Canada, Mr. Jean D’Amour, Quebec Minister of Maritime Affairs and Ms. Valérie Plante, Mayor of Montreal.

Flying the flag of Bermuda, the Ottawa Express is 245 metres long. Chartered by Hapag-Lloyd shipping company, this container ship was commissioned in 1998. The Ottawa Express docked at Berth 77 at the Cast terminal operated by Montreal Gateway Terminals Partnership. It will be reloaded for its departure on January 5.

The results are also excellent in the cruise sector. The Port of Montreal again shattered a cruise traffic record. In 2017, Montreal welcomed more than 114,517 cruise passengers and crew members, a 33% leap over the previous year.

The MPA further advanced its development in 2017. The new container terminal at Viau completed its first full year of operations. It is worth noting that at term, it will make it possible to handle 600,000 twenty-foot equivalent units (TEUs) and provide $340 million in economic benefits annual along with 2,500 direct and indirect jobs.

In September, the MPA submitted its Environmental Impact Statement for its 1.15 million TEU container terminal project at Contrecoeur. “This key project for the future of the container in Montreal and Quebec is based on the steady growth of containerized cargo in recent decades. It grew out of extensive dialogue and cooperative efforts with the local community,” said Ms. Vachon. The project will be subject to consultations through the regulatory process of the federal regulatory process in early 2018.

Lastly, the cruise sector stood out the inauguration in June 2017 of the new Cruise Terminal. Then, In July, the MPA launched the first ever Port Center in Quebec with the opening of History of Ships, the free exhibition that recounts Montreal’s rich port history in models and stories.