On, 28 February 2019, at the Leela Hotel, Mumbai, the inaugural national-level seminar on ‘Human Rights at Sea’ was held by the Forum for Integrated National Security (FINS) think-tank with Indian Government engagement. This was the first time that a State has recognised and been engaged in the emerging ‘Human Rights at Sea’ concept and surrounding debate established by the charity of the same name. 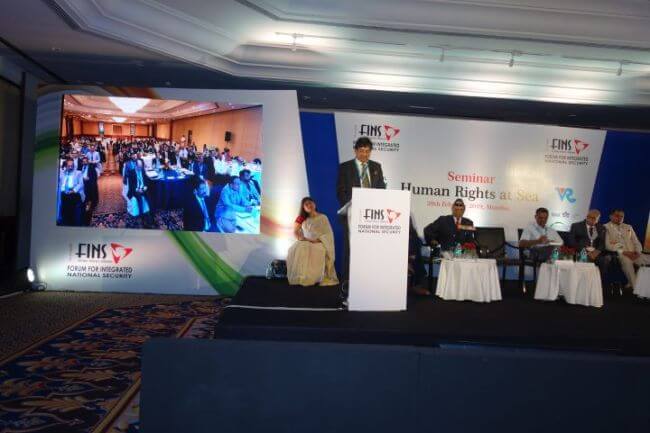 The event was attended by around 300 delegates including the Director General of the National Shipping Board, the current and former Director General of Shipping, the Ministry of External Affairs, the Vice-Counsel for Political Affairs of the US Consulate, Her Excellency, the Ambassador for Madagascar, multiple Indian seafarers’ unions, flag State officials including from the Marshall Islands, the International Maritime Federation, P&I representatives, major shipowners, CSR directors, welfare organisations, maritime lawyers, national media, and merchant marine cadets, among others.

Speakers also included an Indian Navigating Officer who spent two years in jail without due process, and two Indian members of the MV Seaman Guard Ohio, the former US owned floating armoury vessel arrested in October 2013 in Tuticorin port who then spent four years in Chennai, two of which were in jail before being acquitted by the Madras High Court on November 27, 2017.

Organised by Captain Sanjay Prashar, FINS Board member and former seafarer, this high-level seminar was the first such event to be held focusing on the emerging concept and narrative of ‘Human Rights at Sea’ in India.

In context, India was one of the founding members of the IMO, and since then has been elected to the IMO Council in Category B (except for the term of 1983-1984). Of note, Dr. C.P. Srivastava, was the longest serving Secretary General of IMO from 1974 to 1989 and has often been credited for the establishment of World Maritime University in Sweden, International Maritime Academy at Italy, and the International Maritime Law Institute at Malta.

Shri Amitabh Kumar, Director General of Shipping, said: “It is indeed an honor and privilege to stand here today in front of this distinguished audience to share my views on the growth of Indian shipping and the issues faced by India on today’s subject, ‘Human Rights at Sea’.

He went on to highlight the current issues of abandonment of Indian seafarers and restrictions of the MLC, commenting that: “The other loop-hole has emerged in the MLC regime itself, which provides for repatriation of abandoned seafarer, but does not cast any obligation on the insurance agency to provide a replacement seafarer.”

In summing up, the DG finished by saying: “I’m extremely glad to note that the technical sessions will touch upon many more subjects on ‘Human Rights at Sea’ and India’s engagement with IMO and other international bodies. I’m sure these deliberations will result in some concrete suggestions for strengthening of our engagement with these bodies. From our side, we assure you of proactive implementation of all implementable solutions.”

David Hammond, Founder of the Human Rights at Sea platform and concept, was invited to attend and spoke on seafarer criminalisation, including the cases of migrant maritime workers, including fishermen, who become criminalised through failure to service loans for their training and equipment who may be forced to leave their role and are otherwise put in positions of having themselves and their families becoming indentured, and their family assets seized often pushing them into poverty.

In the closing of the conference, Mr. Hammond was specifically thanked by organisers and speakers for his role in establishing the Human Rights at Sea platform.

Mr. Hammond comment: “The continued expansion of the ‘Human Rights at Sea’ concept must become an international shared effort, while the leadership shown today by the Indian Government, and enabled by the Forum, should be an example to other States to open up the human rights at sea narrative and start to embed those four words into everyday State, commercial, and civil society language and due consideration. There is simply no reason why human rights should not apply at sea as equally as they do on land.”