“Around 10 percent of seafarers working on the global merchant fleet originate from India, and the problems that India is addressing affect seafarers of other nationalities. As a rough estimate, over 2,000 seafarers are being abandoned annually and more than 300 are being imprisoned, with the nations involved being largely unsympathetic to their plight.”

Human Rights at Sea is pleased to report that the Indian Ministry of Shipping is working with the National Human Rights Commission (NHRC) of India to improve human rights outcomes for Indian seafarers around the world. This is an ongoing and developing process at the senior government and agency level which has also seen the NHRC engage with the UK charity. 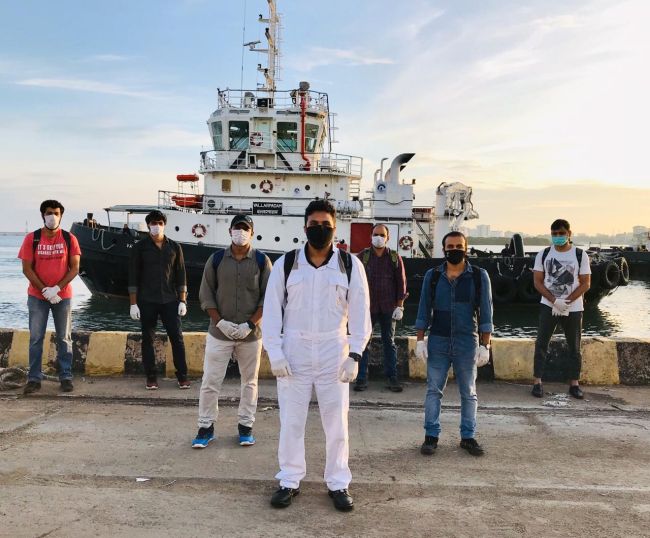 Nearly 90 percent of Indian seafarers are employed on foreign-flagged vessels. Explicit action to protect their human rights comes after a presentation to the Government from the think-tank, Forum for Integrated National Security (FINS), in July last year.

Earlier that year, on 28 February, FINS held a one-day seminar on “Human Rights at Sea” which was attended by more than 250 delegates, including India’s Director-General of the National Shipping Board, the current and former Director-General of Shipping, industry bodies, seafarers, union leaders and NGOs, including the UK charity Human Rights At Sea.

The importance of the event was that it was the first time that a flag State has recognized and been engaged in the emerging ‘Human Rights at Sea’ concept and discussion first initiated by the UK-registered charity of the same name. Further, India was one of the founding members of the IMO.

At that 2019 seminar, David Hammond, Founder, and CEO of Human Rights at Sea spoke on seafarer criminalization, including cases of seafarers who fail to service loans for their training and equipment.

It was specifically highlighted that seafarers may be put in the position of having themselves and their families indentured in servitude, and both their immediate and wider family assets seized, often pushing them into poverty.

Following the event, the charity’s team visited the homes and families of seafarers who were then abandoned on a number of vessels off the UAE resulting in a series of published case studies, including supporting family impact statements: ““My Uncle is a strong man, but he does not have any hope left. His only hope has been to stay sane and to get back some of the wages that are owed to him to take home.”

Captain Prashar also spoke at the July 2019 meeting, which brought together representatives from the NHRC, the Indian Ministry of External Affairs, and the Ministry of Shipping as a result of the February seminar. There, he highlighted issues with unregistered training institutions providing inaccurate information, charging excessive fees, and providing no placement after training. He said the use of illegal recruitment agencies has led to seafarers being unpaid, working in substandard conditions, and not receiving adequate medical care. Additionally, FINS provided cases of seafarers being injured, killed, or going missing without action being taken or compensation being provided.

The Indian government’s E-Migrate initiative established in 2017 and upgraded in 2019 has aimed to provide information on approved training institutes and recruitment agencies, but problems still exist with seafarers being recruited by unrecognized entities.

Concerns about illegal recruitment practices, ill-treatment, loss of liberty, and abandonment go beyond the scope of the Maritime Labour Convention (MLC) 2006, which is focused on providing good working and labor rights conditions for seafarers.

While the MLC provides for repatriation of abandoned seafarers, it does not oblige the insurance company involved to provide a replacement seafarer as required by many port authorities. Ensuring effective and timely action on seafarer abandonment cases crosses government boundaries, both nationally and internationally.

The July 2019 meeting agreed on Action Plans to address the problems raised:

The new Working Group met in November 2019, noting a new initiative by the Directorate General of Shipping call the ‘Online Grievance Redressal Mechanism’ that is proving more effective than the various forms of individual correspondence that were previously relied on. Over 350 complaints have now been received. A short-list of existing cases has also been highlighted to the Working Group for specific action.

At the Working Group meeting, FINS encouraged further research to evaluate causes and possible solutions so that seafarers can have the same human rights and effective remedies as workers on land. This includes greater effort to raise awareness across the industry, including at the International Maritime Organization. The meeting participants agreed that an action-driven agenda will be pursued.

Around 10 percent of seafarers working on the global merchant fleet originate from India, and the problems that India is addressing affect seafarers of other nationalities. As a rough estimate, over 2,000 seafarers are being abandoned annually and more than 300 are being imprisoned, with the nations involved being largely unsympathetic to their plight.

David Hammond, CEO, Human Rights at Sea, has repeatedly called for the international expansion of the ‘human rights at sea’ concept and founding principle across State, non-State actor and civil society forums.

Recognising the leadership shown by the Indian Government, Hammond says that it should set an example to other States to open up the human rights at sea narrative and take action to ensure that “human rights apply at sea, as they do on land”.

The initiative by India authorities is even more notable during the ongoing COVID-19 pandemic and associated crew-change crisis where globally, all seafarers need to be designated as key workers and provided with the necessary support to counter what the UN Secretary General, António Guterres, has referred to as a “humanitarian crisis”.