As per the World Bank report 2019 on Ease of Doing Business, India has taken a huge leap of 23 ranks from 100 in 2017-18 to 77 in 2018-19 indicating it is continuing its steady shift towards global standards. One of the key indices which have contributed immensely toward this growth is ‘Trading across borders’ which shows an impressive improvement from 146 rank last year to 80th rank this year.

The Ministry of Shipping has been taking initiatives to improve the parameter of ‘Trading across the border’ as 92% of India’s Export-Import trade by volume is handled at ports.

The report mentions that this is mainly due to India’s continued reform agenda, which has made it the top-ranked economy in the region. Upgradation of port infrastructure, Improvement of processes, and digitization of document submission have substantially reduced Export/Import cargo handling time at ports which have significantly contributed towards improving the trading across border parameter and India’s impressive growth in the World Bank’s report. The World Bank has recognized India as one of the top improvers for the year. 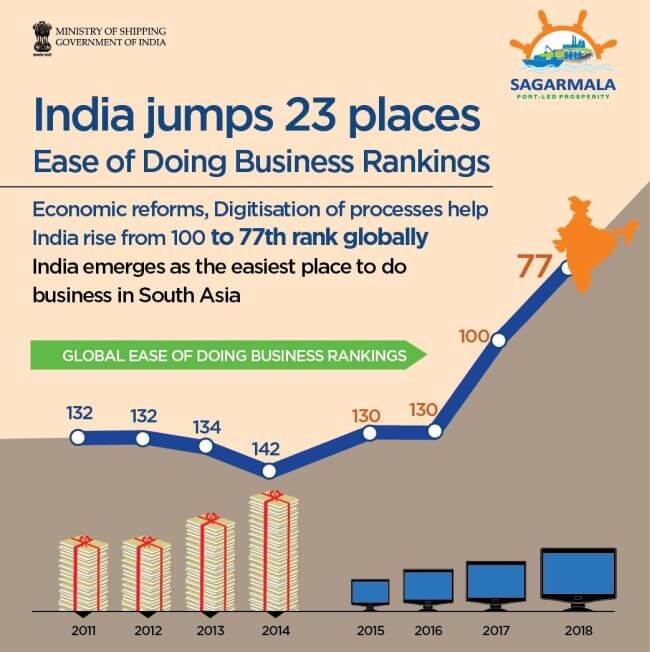 “Focused efforts at improving the export/import cargo handling at major ports has contributed to improving the Ease of Doing Business in India and this will help in economic growth & more jobs opportunities for the youth.”,said Shri Nitin Gadkari, Union Minister for Shipping, Road Transport & Highways and Water Resources, River Development and Ganga Rejuvenation.

The Government has initiated a series of steps to make India’s EXIM logistics more competitive in terms of time and cost. A series of studies to benchmark the performance of Indian Major Ports with their international counterparts has been undertaken and steps to increase the capacity and productivity to global standards have been initiated. Specifically, 114 initiatives which were identified have been undertaken.

“The focus has been on development of port infrastructure and capacity enhancement, improvement in last mile connectivity and development of multi-modal hubs to promote EXIM while reducing logistics cost and time. Under Sagarmala, port-led-development initiative of the Govt, 266 port modernization projects with an investment of more than Rs 1.45 lakh Crore has been identified for implementation over next 10 years.” said the Minister.

“In order to enhance last mile connectivity, 211 road-rail projects worth Rs 250,907 Crore have been identified under Sagarmala.15 multimodal logistic parks with an investment of Rs3,989 will help in improving efficiency in freight movement under the programme”, the minister added.

With more than 5 % average growth at major ports over the last 4 years, the Ministry of Shipping has taken several steps to improve their operational efficiencies through policy and procedural changes and mechanization.

Transfer of conventional activities to digital platforms, use of technology for moving cargo and simplification of processes have been done to promote business and facilitate ease of doing business. Steps taken include the following: