Sagarmala, the ambitious programme for ‘Port-led development’ in the country is all set to change the logistics sector performance by optimizing India’s logistics modal mix. The flagship programme by the Ministry of Shipping will help in reducing the logistics cost for both domestic and EXIM cargo with optimized infrastructure investment. An overall cost savings of INR 35,000 to 40,000 Crore per annum by 2025 is estimated from the same. 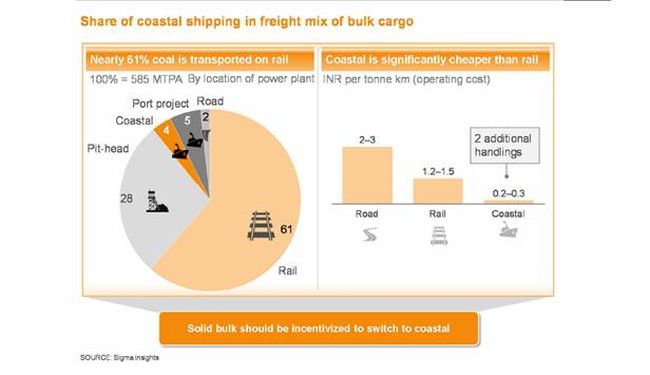 The programme aims to increase movement of coal through coastal route from 27 MTPA in FY 2016 to 129 MTPA by 2025 and increase the share of inland waterways and coastal shipping in modal mix to increase from 6% to 12%. The programme envisions reduction in the cost of power generation by Rs 0.50 per unit of power.

It is estimated that for power plants located 800 to 1,000 km away from coal mines, the cost of coal logistics can contribute up to 35 per cent of the cost of power production. Particularly in the case of the Coastal power plants in Andhra Pradesh and Karnataka, that currently receive coal from Mahanadi Coalfields by Railways, significant savings can be achieved by taking coal through the rail-sea-rail (RSR) route. It is estimated that coastal movement of coal to these plants can result in annual savings of over INR 10,000 Crore to the power sector.

In addition, up to 50 Million tonnes of coal can be moved via coastal shipping for non-power thermal coal users (for example steel plants). Other commodities such as steel, cement, fertilizers, POL and food grains could also be moved via coastal shipping to the extent of about 80-85 MN tonnes by 2025. Additionally, an estimated 60 to 70 MN tones of cargo can also be moved over inland waterways (with focus on NW1, NW2,NW4 and NW5) by 2025.

The concept of “port led development” is central to the Sagarmala vision. Port led development focuses on logistics intensive industries (where transportation either represents a high proportion of costs, or timely logistics are a critical success factor). The population in adjoining areas would have to be sufficiently skilled to participate in economic opportunities on offer. The synergistic and coordinated development of four components, namely logistics intensive industries, efficient ports, seamless connectivity and requisite skill-base will lead to unlocking of economic value.

India, where the logistics cost (19% of GDP) is amongst the highest in the world will undergo complete transformation under the Sagarmala Programme, by unlocking the full potential of India’s coastline and waterways.