Addressing the gathering on the occasion, the Prime Minister noted that he had come to Maharashtra, a day before the Jayanti of the great Shivaji Maharaj. 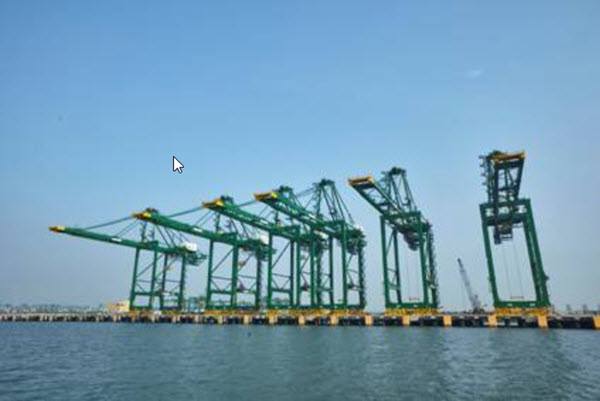 The Prime Minister said that the Navi Mumbai airport project has been pending for years. He said delayed projects cause many problems, and the PRAGATI initiative had been initiated, to give priority to completion of projects.

He said India’s aviation sector is growing tremendously, and there is a sharp increase in the number of people flying. This makes quality infrastructure in the aviation sector of prime importance, he added. The Prime Minister said that the Union Government has brought an aviation policy that is transforming the sector. He added that a strong aviation sector also gives more economic opportunities. Better connectivity leads to more tourists coming to India, he said.

The Fourth Container Terminal has been developed on Design, Built, Fund, Operate and Transfer (DBFOT) basis for a concession period of 30 years at an estimated cost of Rs. 7915 Crore. The project is being implemented in two Phases. i.e. Phase –I and Phase –II. The indicative cost of the project for Phase – I is Rs 4719 Crore. The foundation stone for the project was laid by Prime Minister Shri Narendra Modi in October 2015, and Phase I has been completed in record time.

This Terminal will be linked to the dedicated rail freight corridor and will be able to receive about 350 containers per rake. The rail facilities will be the largest in India with the only on-dock Dedicated Freight Corridor (“DFC”) compliant facility in India, capable of handling 1.5km long, 360 Twenty-foot Equivalent Unit (“TEU”) container trains on completion of the DFC. The facility will also have provision for storing 1,600 reefer (refrigerated) containers to handle agricultural and horticulture produce.Thus, the commencement of operations at the 4th terminal offers a great opportunity for the EXIM community to avail of the new facilities.

Development of world-class infrastructure to boost international trade and give impetus to ‘Make in India’ programme has been among the key focus areas of the government. In this regard, Jawaharlal Nehru Port Trust is taking every step to be future ready and contribute to Government of India’s vision of port-led development under Sagarmala Programme.

Shri Nitin Gadkari, Minister of Shipping, Road Transport & Highway and Water Resources, River Development and Ganga Rejuvenation says, “As committed by Hon’ble Prime Minister, Shri Narendra Modi, the first Phase of the terminal is ready in a record time. Logistics play a key role in the development of the economy and the government is committed to providing world-class logistics and infrastructure facilities so that trade flourishes’

Under Sagarmala, 101 projects worth Rs 2.5 Lakh Crore have been planned in Maharashtra. Out of these, 5 projects have already been completed and 58 projects are under various stages of development. JNPT, under Ministry of Shipping, is engaged in creating an enabling environment to encourage trade and the completion of the 4th terminal reinforces the government’s commitment to creating a hassle-free business environment for the export-import community.