The Prime Minister, Shri Narendra Modi inaugurated the Mundra LNG terminal, the Anjar-Mundra Pipeline Project and the Palanpur-Pali-Barmer pipeline project, at Anjar. Speaking on the occasion, the Prime Minister said that the affection he receives in Kutch is unparalleled. He appreciated the development work that has happened in the Kutch region over the last 20 years.

He said that the inauguration of the LNG terminal is the highlight of today’s programme. I am fortunate to have inaugurated three LNG terminals, he added.

Shri Narendra Modi said that when Gujarat got its first LNG terminal, people were surprised. Now, the State is poised to make a fourth LNG terminal, he added. 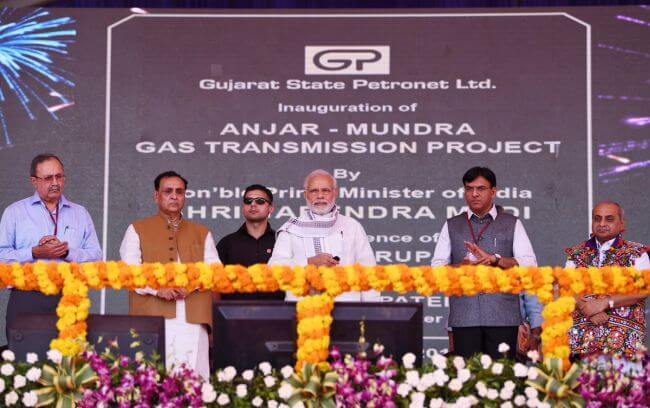 The Prime Minister said that the aspirations of people are rising, and they want i-ways, gas grids, water grids, and optical fibre networks in addition to conventional infrastructure.

The Prime Minister said that there are ample opportunities in the tourism sector, and the world is keen to come to India. We have seen in Kutch too, how the White Rann has become the cynosure of all eyes from across the world, he added. He spoke of the steps taken by the Union Government to make the aviation sector more affordable and improve connectivity.

The Prime Minister also spoke of the efforts made to ensure that all villages are electrified, and the work being done towards electrifying every single household in India. We want to bring qualitative changes in the lives of the common citizen of India, he added.