The vessel is 50 meter long, fitted with 30 mm CRN-91 Gun, 12.7 mm HMGs & 7.62 mm MMGs besides state-of-the-art Navigation and Communication equipment and is capable of achieving a high speed of 35 knots. Significantly, trials were undertaken in peak monsoon months and the vessel achieved all design parameters. 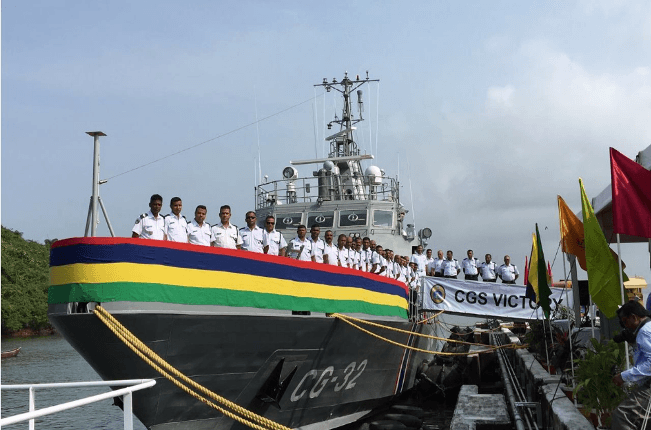 The ship was ceremonially handed over by RAdm. Shekhar Mital, NM (Retd), CMD, Goa Shipyard Ltd to Mr. K. Jhugroo, Deputy Commissioner of Police, Mauritius Police Force, Government of Mauritius in the distinguished presence of senior officials from Mauritius and India. In his address on this occasion CMD, GSL said, “Contract of the vessel was signed on 17th May, 2014 and the keel of this vessel was laid on 18th Dec, 2014.

Despite all the challenges, including delay of over six months in supply of steel and being the first ship of the series, we have successfully delivered this ship as per contractual schedule of Sept, 2016, i.e. within 20 months of keel laying which is a record in itself, and is in line with the track record of GSL in recent years of timely deliveries and shows the dedication and commitment of all the stakeholders involved. ” CMD thanked Government of Mauritius, Ministry of Defence, State Government and local authorities for providing all the necessary assistance, which has enabled GSL to achieve new milestones in the performance.

Mr. K. Jhugroo, Deputy Commissioner of Police, Mauritius Police Force, while addressing the gathering lauded the excellent work being done in the shipyard and complemented GSL for delivery of the state-of- the-art new ship for Mauritius. He further complimented the GSL work force on their working skills and positive attitude, which is an example for others to emulate.

GSL is the largest exporter of ships from the Indian subcontinent and is presently executing export orders worth Rs. 1200 Crore. GSL prides itself in timely delivery of ships at ‘fixed cost’ and enjoys very strong execution skills.

Aker BP And Framo Sign First Long-Term Smart Contract For Offshore Maintenance
Want to share your tips and advice? Got questions? Visit the community forum to ask questions, get answers, meet people, and share your tips!