Addressing the function, the ADG SPS Basra termed the FPVs as the work horses of Coast Guard. The flag officer also dwelt upon the fast paced development of the Indian Coast Guard and acknowledged its efforts to face the emerging security challenges in the maritime domain. He emphasised the importance of coastal security in view of the asymmetric threats from the sea and emphasised synergy in cooperation amongst all stakeholders to ensure maritime safety in face of nefarious designs. Indian Coast Guard will be a 150 ships/boats and 100 aircraft maritime force in next few years. In addition to these operational assets, a coastal surveillance network is being established with 46 stations to ensure real time coastal surveillance. 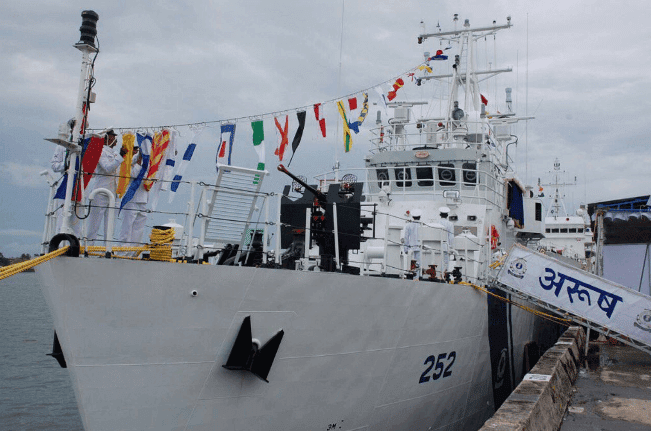 The Commander Coast Guard Region (West) Inspector General K Natarajan and other senior dignitaries of the Central and State Government were present on the occasion. The 50 meter indigenous FPV displaces 421 tonnes and can achieve a maximum speed of 33 knots with an endurance of 1500 nautical miles at economical speed of 13 knots, equipped with state-of-the-art weaponry and advanced communication and navigational equipment. She makes an ideal platform for undertaking multifarious close-coast missions such as surveillance, interdiction, search and rescue and medical evacuation. The special features of the ship include an Integrated Bridge Management System (IBMS) and Integrated Machinery Control System (IMCS).

The ship has been named ICGS ‘Arush’, literally meaning ‘first ray of sun’, and will be based at Porbandar under the administrative and operational control of the Commander, Coast Guard Region (North West). The ship is commanded by Commandant Pramod Pokhriyal and has complement of four officers and 33 enrolled personnel.

MSC Takes Responsibility To Run Operations Despite COVID-19 Curfews
Want to share your tips and advice? Got questions? Visit the community forum to ask questions, get answers, meet people, and share your tips!