Incat Crowther is pleased to confirm that construction is well advanced for a second 70m Catamaran Crew boat sister ship to the Muslim Magomayev.

Muslim Magomayev is a first-of-type vessel which Incat Crowther developed in close conjunction with Caspian Marine Services. Incat Crowther has undertaken extensive support work in the field, including involvement in engineering for the fitting of an Ampellmann walk-to-work stabilized access platform, making it the first catamaran to have such a system and its structure fully integrated into its design.

The operational success of the vessel has led CMS to order a second unit, with construction well advanced at Austal Ships’ Western Australian shipyard. Incat Crowther has worked with Austal Ships to provide an extensive list of design deliverables for the project, including naval architecture and detailed construction drawings with cutting and nesting data. 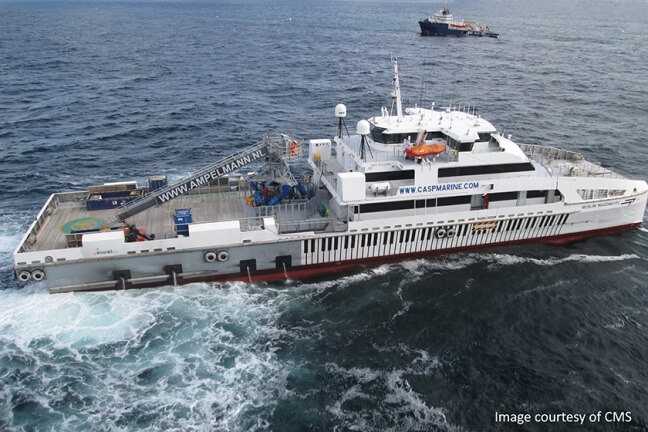 Muslim Magomayev, built by Incat Tasmania, holds station using dynamic positioning (DNV DYNPOS-AUTR) whilst the access system compensates for the vessel’s motion by using a control system linked to hydraulic cylinders. Crew transfers can be performed with a 98.5% uptime in prevailing conditions.

The vessel will retain Muslim Magomayev’s cornerstone flexibility, with 275sqm of cargo decks space, 130 ton cargo capacity and a range of 400nm.

Passengers are accommodated on both the main deck and mid-deck, with the mid-deck featuring crew accommodation for 16. All crew cabins offer excellent crew comfort and are ILO-compliant.The main deck also features VIP rooms, vending machines, luggage space and a large workshop.

The vessel is fully-compliant with the IMO HSC code, is DP2 classed, provides an excellently stable platform for transfers and performs exceptionally in all sea conditions.

Construction is well progressed, with the superstructure and hull modules recently being united at the shipyard prior to being inspected by the Australian Prime Minister Malcolm Turnbull on the campaign trail.

Muslim Magomayev has proven herself invaluable in the Caspian area recently rescuing more than 30 personnel from an emergency situation aboard an offshore platform in hazardous sea conditions.