The International Maritime Organization (IMO) has taken action to warn ship Masters of the possible dangers of liquefaction associated with carriage of bauxite, following consideration of findings from the investigation into the loss of the 10-year-old Bahamas flag bulk carrier Bulk Jupiter, which was carrying 46,400 tonnes of bauxite when it sank rapidly with 18 fatalities in January 2015.

A circular approved by IMO’s Sub-Committee on Carriage of Containers and Cargoes (CCC), meeting this week at IMO Headquarters, warns ship Masters not to accept bauxite for carriage unless:

The circular notes that while bauxite is currently classified as a Group C cargo (cargoes that do not liquefy or possess a chemical hazard) under the International Maritime Solid Bulk Cargoes (IMSBC) Code, there is a need to raise awareness of the possible dangers of liquefaction associated with bauxite. If a Group A cargo (cargo which may liquefy) is shipped with moisture content in excess of its transportable moisture limit (TML), there is a risk of cargo shift, which may result in capsizing. 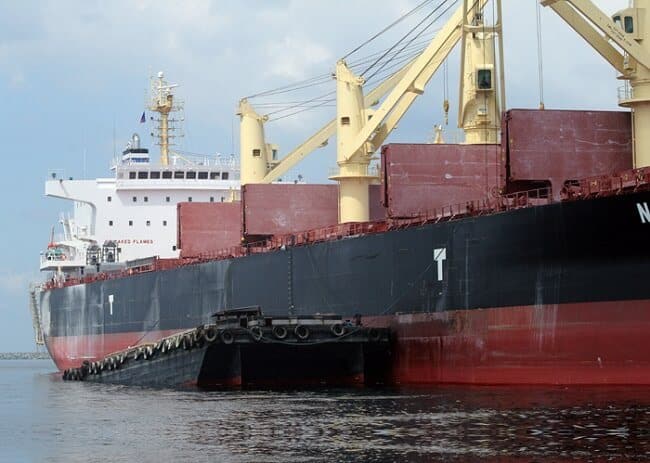 The mandatory IMSBC Code requires Group A cargoes to be tested, before loading, to determine their TML and their actual moisture content. The testing should confirm the cargo is below the maximum moisture content considered safe for carriage.

The Sub-Committee was informed of the marine safety investigation into the loss of the Bulk Jupiter, which has uncovered evidence to suggest liquefaction of cargo led to loss of stability. Ongoing research to evaluate the properties of bauxite is being carried out by Australia and Brazil, while an ongoing research project in China suggests that bauxite has various behaviours, based on the parent rock and how the materials weather.

The Sub-Committee also established a correspondence group to evaluate the properties of bauxite and coal (some types of coal may liquefy) and consider any necessary amendments to the IMSBC Code.

Liquefaction occurs when a cargo (which may not appear visibly wet) has a level of moisture in between particles. During a voyage, the ship movement may cause the cargo to liquefy and become viscous and fluid, which can lead to cargo flowing with the roll of the ship and potentially causing a dangerous list and sudden capsize of the vessel. Special consideration and precautions should be taken when loading a cargo which may liquefy.

The investigation report into the loss of the Bulk Jupiter can be downloaded from the Marine Casualties and Incidents module of IMO’s Global Integrated Shipping Information System (GISIS) https://gisis.imo.org/Public/Default.aspx (public access but registration needed).