Ships plying their trade across the world’s oceans are subject to stringent environmental, safety and security rules, which apply throughout their voyage. The comprehensive regulatory framework developed by IMO for international shipping has been highlighted during a United Nations oceans conference in New York, United States (4-17 September). The conference is taking the first steps towards developing a legally binding international instrument on the conservation and sustainable use of marine biological diversity in areas beyond national jurisdiction – known as ‘BBNJ’. 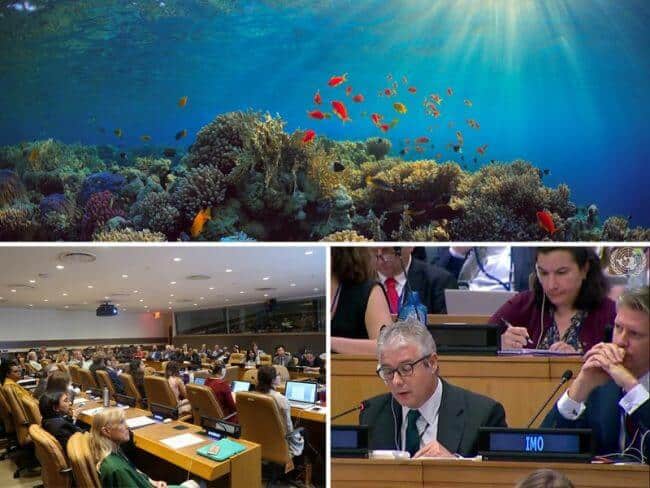 IMO regulations are enforced through a well-established system of flag, coastal and port State control. Many IMO measures actively contribute to the conservation of marine biological diversity in areas beyond national jurisdiction, including the International Convention for the Prevention of Pollution by ships (MARPOL) and the International Ballast Water Management Convention – which aims to prevent the transfer of potentially invasive aquatic species – as well as the London Convention and Protocol regulating the dumping of wastes at sea. IMO has adopted numerous protective measures, which all ships must adhere to, both in and outside designated sensitive sea areas (PSSAs) and in special areas and emission control areas. These include strict rules on operational discharges as well as areas to be avoided and other ship routeing systems, including those aimed at keeping shipping away from whales’ breeding grounds. IMO’s Polar Code is mandatory for ships for operating in the Arctic and Antarctic. IMO has also issued guidance on protecting marine life from underwater ship noise.

IMO’s Fredrik Haag outlined IMO’s experience in developing universal binding regulations for international shipping to ensure shipping’s sustainable use of the oceans, through more than 50 globally-binding treaties. IMO welcomes the efforts to further address the conservation and sustainable use of marine biodiversity in areas beyond national jurisdiction and has been encouraged by the fact the preparatory process for the new instrument has noted that a new agreement should recognize and not undermine existing relevant legal instruments and frameworks, and relevant global and sectorial bodies.

Mr. Haag also presented IMO’s regulatory regime and its relevance to BBNJ during a side event on shipping, held at UN Headquarters (5 September). The event was jointly-organized by IMO, the governments of the Marshall Islands and Norway, and the International Chamber of shipping, (ICS), with the assistance of the Norwegian Shipowners’ Association.

The series of conferences to develop the new BBNJ legally-binding instrument under the United Nations Convention on the Law of the Sea (UNCLOS) is expected to conclude in 2020.