IMO Secretary-General Kitack Lim has been reporting on the solid progress being made by the Organization to reduce GHG emissions from international shipping, in support of the 2030 Agenda for Sustainable Development, in particular SDG 13 on Climate change.

​The UN Climate Action Summit in New York (23 September) is giving global leaders the chance to show the world concrete proposals and tangible actions being taken in the fight against climate change.

IMO Secretary-General Lim delivered a keynote address at the opening of the World Economic Forum event on decarbonizing shipping. He then delivered a presentation at the launch of the Sustainable Ocean Principles, under the banner of the UN Global Compact. 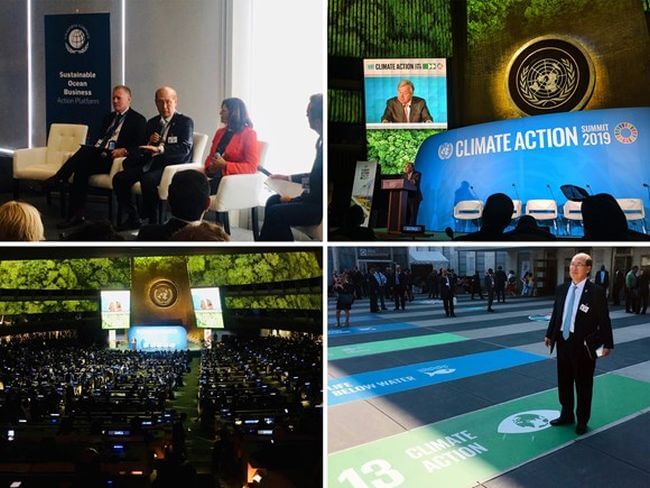 The Global Compact provides a tangible and practical way for the corporate world to embrace values that go beyond simply generating profits for their shareholders. Finally, he delivered a keynote address at the side-event organized by the Government of Belgium entitled “Actions speak louder than words”.

He also took the opportunity for bilateral meetings with several key figures in the fight against climate change, including Ms Inger Andersen, who was appointed Executive Director of the United Nations Environment Programme in February this year. Mr Lim also met senior officials of the World Bank to discuss areas of common interest and to explore possible future collaboration to support the decarbonization of international shipping and its associated infrastructure, as well as marine plastic litter and waste management.

Throughout the event, Mr Lim has been highlighting IMO’s initial greenhouse gas strategy, adopted in 2018. This envisages a total annual GHG emissions reduction of at least 50% by 2050 compared to 2008, and eventually phasing them out as soon as possible in this century. This means that individual ships currently at sea would have to reduce their emissions by more than 80%.

The IMO initial GHG strategy has sent a clear signal to the shipping industry of the way forward and there are already strong signs that it is being embraced by both industry and financial institutions. Battery powered and hybrid ferries, ships trialling biofuels or hydrogen fuel cells, wind-assisted propulsion and several other ideas are now being actively explored.

Alongside this, Mr Lim spoke of several major, global projects being led by IMO. These bring Member States and the industry together to promote implementation of all the various IMO measures related to GHG reduction.