You are here: Home › Shipping News › IMO Reiterates: No Ban On Travel Or Trade Needed Due To Ebola
TwitterFacebookLinkedInPinterestBuffer

The International Maritime Organization (IMO) today (24 October) reiterated that there should be no general ban on international travel or trade due to the Ebola virus disease outbreak in West Africa, citing the recommendations of the third meeting of the Emergency Committee convened by the World Health Organization (WHO) Director-General on Wednesday, 22 October 2014.

“We would recommend to all our Member States as well as the broader maritime community, shipping companies, ship operators and port and terminal operators that they follow the recommendations of the World Health Organization, which is that the movement of ships, including the handling of cargo and goods, to and from the affected areas, should continue as normal, in order to reduce the isolation and economic hardship of the affected countries,” said Mr. Andy Winbow, Assistant Secretary-General and Director, Maritime Safety Division, IMO.

“Any necessary medical treatment should be available ashore for seafarers and passengers,” Mr. Winbow said. 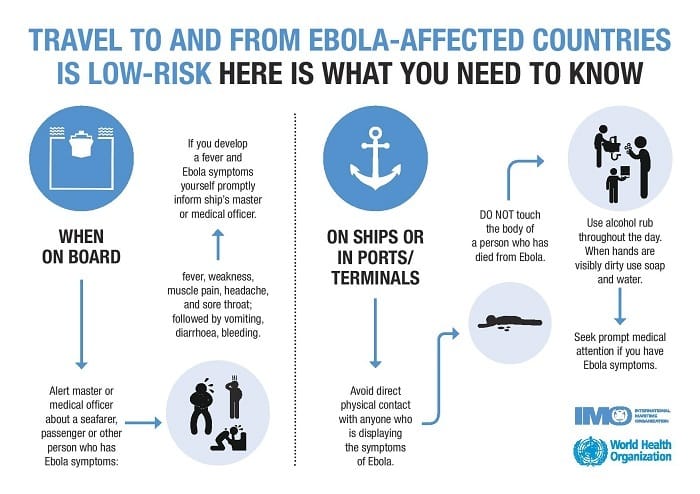 The Statement on the 3rd meeting of the IHR Emergency Committee regarding the 2014 Ebola outbreak in West Africa notes that previous recommendations regarding the travel of Ebola virus disease cases and contacts should continue to be implemented.

IMO has issued an infographic “What you need to know” which can be downloaded and used on board ships and in ports and terminals. The infographic will shortly be available in all six official languages of the Organization.

The WHO notes that while a number of States have recently introduced entry screening measures, WHO encourages countries implementing such measures to share their experiences and lessons learned. Entry screening may have a limited effect in reducing international spread when added to exit screening, and its advantages and disadvantages should be carefully considered.

If entry screening is implemented, States should take into account the following considerations: it offers an opportunity for individual sensitization, but the resource demands may be significant, even if screening is targeted; and management systems must be in place to care for travellers and suspected cases in compliance with International Health Regulations (IHR) requirements.