The IMO low sulphur fuel cap introduced in January 2020 has not eradicated the potential threats from cat fines, sludge, compatibility issues, asphaltene and fuel stability – the five key issues that can damage the health and maintenance of diesel engines, according to Aderco – one of the world’s leading fuel treatment technology suppliers.

Aderco has recently released a new report to improve fuel performance and prevent damage to maritime diesel engines. The report follows a series of tests conducted in Belgium and Singapore on low sulphur fuels over recent months. The tests show the marked improvements that can be achieved from a fuel treatment in reducing commingling and improving fuel stability, reducing sludge and removing water from the new fuels.

Reducing the sulphur content in the compliant fuels and, more especially, Ultra Low Sulphur Marine Gas Oil, one can see a marked increase in microbial growth. ULSMGO is well known for this issue. The use of biodiesel in the blending process can generate a high water content which is the ideal breeding ground for bacteria. This poses a real risk to the engine’s pipework and filters which could result in catastrophic failure. However, by using fuel treatment, this eradicates any biological damage. 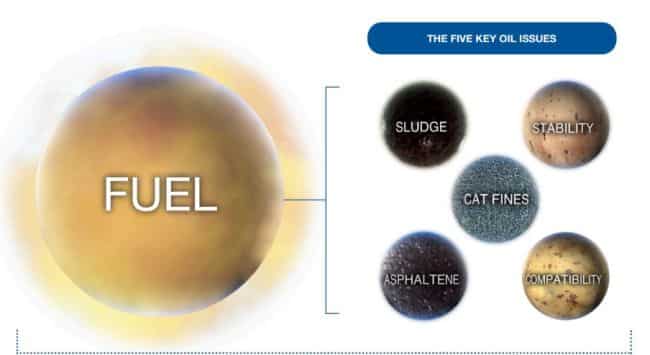 “The new low sulphur fuel hasn’t stopped the issues of fuel instability and contamination which are of primary concern for ship owners, ship managers and operators. VLSFO is still prone to the five issues that can cause engine

breakdowns and poor performance and our tests prove that the damaging issues of cat fines, sludge, corrosion, contamination and fuel stability can be reduced and eliminated with a fuel treatment.

At Aderco we have been working with customers since last year on the lead up to the 2020 low sulphur cap and continuously since its introduction to ensure our fuel treatments will protect engines from corrosion and microbial damage, as we are acutely aware that these issues have not disappeared with the introduction of the new blended fuels in 2020. By using a reliable fuel treatment, ship owners, ship managers and operators can operate diesel engines without the worry about costly engine failures, lay-up or any off-hire caused by contamination, fuel instability and its associated problems. This use of a fuel treatment seems a small price to pay for peace of mind and operational efficiency.”