A new global project to prevent and reduce marine plastic litter from shipping and fisheries has been launched (5 December) by the International Maritime Organization (IMO) and the Food and Agriculture Organization of the United Nations (FAO). Initial funding for the project is from the Government of Norway.

Plastic litter in the oceans is recognised as a major environmental problem. The GloLitter Partnerships Project aims to help shipping and fisheries move to a low-plastics future.

GloLitter will assist developing countries identify opportunities to prevent and reduce marine litter, including plastic litter, from within the maritime transport and fisheries sectors, and to decrease the use of plastics in these industries, including identifying opportunities to re-use and recycle plastics. 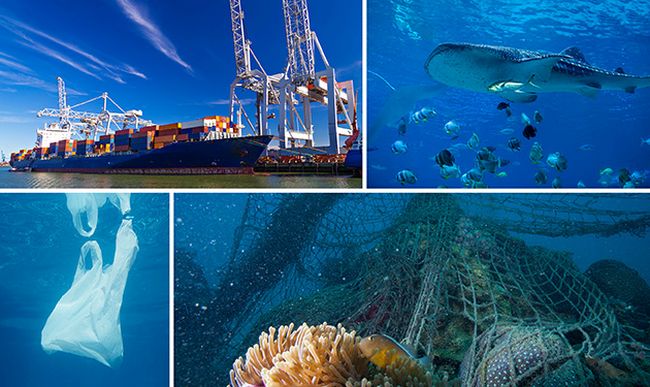 The project will consider the availability and adequacy of port reception facilities; look at enhancing awareness of the marine plastics issue within the shipping and fisheries sectors, including seafarers and fishers; and encourage fishing gear to be marked so it can be traced back to its owner if discarded.

The GloLitter project will develop guidance documents, training material and toolkits to help enforce existing regulations, including IMO’s International Convention for the Prevention of Pollution from Ships (MARPOL) Annex V. Since 1988, this has prohibited the discharge of plastics, including discarded fishing gear, into the sea from ships.

The project will also promote compliance with relevant FAO instruments (including the Voluntary Guidelines on the Marking of Fishing Gear) and will target waste management in ports. It will, additionally, emphasise implementation and enforcement of IMO’s London Convention/London Protocol regime on dumping of wastes at sea, which requires waste (such as from dredging) to be assessed before permits to dump are granted.

The GloLitter project will include private sector participation through a global industry alliance and is seeking partners from major maritime and fisheries companies.

“Plastic litter in the oceans is harming fish, marine mammals and seabirds and threatening the entire marine ecosystem. IMO has been at the forefront of addressing this issue from the perspective of shipping and dumping at sea and this global project will further strengthen efforts within the fishing and maritime transport sectors to pilot, demonstrate and test best practices to deal with marine plastic litter. Our ambition is to move the maritime transport and fisheries sectors towards a future with no plastic waste entering the sea, and to share our successes with other sectors that could be encouraged to strengthen their efforts too,” said Mr. Kitack Lim, Secretary-General, IMO.

‘In the fight against marine litter, it is vital to strengthen the capacity to prevent pollution from shipping and fisheries in developing countries. Norway is therefore allocating NOK 40 million to a new project under IMO, which has a great deal of expertise in the field,” said Norway’s Minister of International Development Dag-Inge Ulstein.

Dr. Matthew Camilleri, Head of FAO’s Fishing Operations and Technology Branch, said the partnership between FAO and IMO, further strengthened by the support of the Government of Norway, will enhance technical assistance to developing countries and increase their capacity to develop strategies for reducing marine litter from fishing operations, and to implement the Voluntary Guidelines on the Marking of Fishing Gear.

“The fisheries sector has an important role in reducing pollution of the marine environment by plastic litter, particularly from abandoned, lost or otherwise discarded fishing gear, and should seek to develop fishing port facilities and schemes for sustainable waste processing, recycling and re-use of materials which contribute to marine litter,” Dr. Camilleri said.

The project is intended to be a multi-donor programme. The initial funding of NOK 40 million (approximately US$4.5 million) from the Government of Norway provides for a 3.5-year project, executed by IMO in partnership with FAO.

‘Shipping and fisheries are a major source of marine litter, and Norway has considerable knowledge in this area. Through the GloLitter project, we will contribute to strengthen international efforts to fight plastic litter from shipping and fisheries. The Government is also working to achieve a comprehensive global agreement to combat marine plastic litter from all sources,’ said Norway’s Minister of Climate and Environment Ola Elvestuen.

Collaboration with other international, regional and national partners through additional in-kind co-financing is envisaged, from the private sector as well as beneficiary countries. The planned Global Industry Alliance (GIA) will link with the UN Global Compact, which has adopted Sustainable Ocean Principles for responsible business practices.

The GloLitter Partnerships Project follows the successful implementation of a similar model of cooperation and collaboration, in the GloBallast, GloMEEP and GloFouling projects. This has been referred to as the “Glo-X” model – which combines national, regional and global efforts, combined with public-private partnerships to push research and development and capacity building.

The GloLitter Partnerships project will directly help to achieve one of the of the specific targets in the global Sustainable Development Goal (SDG) 14 – to “prevent and significantly reduce marine pollution of all kinds, in particular from land-based activities, including marine debris and nutrient pollution, by 2025”.

The GloLitter Partnerships Project agreement was signed by IMO Secretary-General Kitack Lim and His Excellency Wegger Chr. Strømmen, Norway’s Ambassador to the United Kingdom of Great Britain and Northern Ireland, on Thursday 5 December, 2019.

ITF: Panama Canal Authority Is ‘Deflecting From The Real Issue’
Want to share your tips and advice? Got questions? Visit the community forum to ask questions, get answers, meet people, and share your tips!