Spain has become the latest country to accede to the International Maritime Organization’s Cape Town Agreement on fishing vessel safety, significantly boosting the number of vessels needed for entry into force.

The entry into force of the 2012 Cape Town Agreement will result in benefits for the fishing industry, including fewer accidents, fewer lives lost and a more effective infrastructure for monitoring and targeting illegal, unreported and unregulated fishing.

“With Spain’s accession we are approaching half way to reaching the entry into force criteria for this vital treaty. I urge other IMO Member States, who have not already become a party to the treaty, to follow suit,” said IMO Secretary-General Kitack Lim.

“The Cape Town Agreement needs to enter into force so that we can fill the regulatory gap and have an effective international regime to address fishing vessel safety – and reduce fatalities in one of the most dangerous professions in the world,” Mr. Lim said.

International treaties such as the International Convention for the Safety of Life at Sea, 1974 (SOLAS) have been in force for many decades for commercial shipping, including cargo and passenger ships. SOLAS includes a number of regulations which are applicable to all ships, such as SOLAS chapter V on safety of navigation. However, many other SOLAS regulations provide an exemption for fishing vessels. The Cape Town Agreement fills the gap in international regulations by providing the necessary safety regulations for the fishing industry. 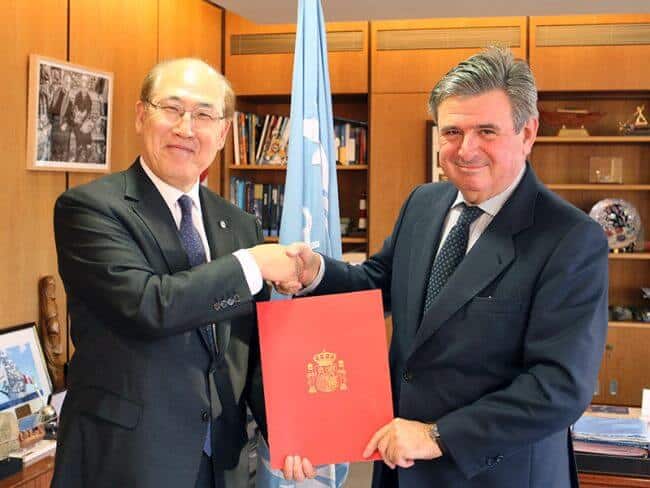 H.E. Mr. Carlos Bastarreche Sagües, Ambassador of Spain to the United Kingdom and Permanent Representative of Spain to IMO, deposited the instrument of accession to the Cape Town Agreement with Secretary-General Lim.

The Conference will be followed by a meeting of the Joint Food and Agriculture Organization (FAO) /IMO Ad Hoc Working Group on IUU Fishing and Related Matters, pending approval by MEPC 74 and MSC 101. The Joint Working Group meeting will also be sponsored by the Government of Spain.

FAO and Pew Charitable Trusts have pledged additional funds and in kind support for the Conference and Working Group meeting.

The Cape Town Agreement
Cape Town Agreement of 2012 on the Implementation of the Provisions of the Torremolinos Protocol of 1993 Relating to the Torremolinos International Convention for the Safety of Fishing Vessels, 1977 is an internationally-binding instrument not yet in force. The Agreement includes mandatory international requirements for stability and associated seaworthiness, machinery, electrical installations, life-saving appliances, communications equipment, fire protection, and fishing vessel construction. The Cape Town Agreement provides a solid platform for improving fishers’ safety at sea and combating IUU fishing by facilitating better control of fishing vessel safety by flag, port and coastal States.

The Cape Town Agreement is one of four international treaties aimed at achieving higher levels of safety and better compliance and enforcement in the fishing industry, and the only treaty of the four yet to enter into force. The four treaties are: