The IMO Assembly met for its 30th session at IMO Headquarters in London, United Kingdom (27 November to 6 December). The Assembly was the largest-ever gathering at IMO Headquarters in London, attended by some 1,400 participants, including 56 at the ministerial level, from 165 Member States, as well as observers from inter-governmental and non-governmental organizations.

The Assembly adopted its strategic plan for 2018-2023, including a revised mission statement, a vision statement (included for the first time) and seven newly-identified strategic directions for IMO, placing the Organization firmly on route to supporting the implementation of the United Nations Sustainable Development Goals and the 2030 Agenda for Sustainable Development.

The strategic directions are: 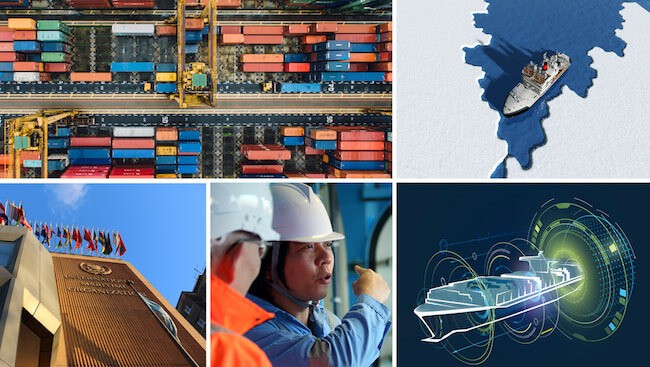 “IMO will uphold its leadership role as the global regulator of shipping, promote greater recognition of the sector’s importance and enable the advancement of shipping, whilst addressing the challenges of continued developments in technology and world trade; and the need to meet the 2030 Agenda for Sustainable Development.

To achieve this, IMO will focus on review, development and implementation of and compliance with IMO instruments in its pursuit to proactively identify, analyse and address emerging issues and support Member States in their implementation of the 2030 Agenda for Sustainable Development.”

The Assembly adopted three resolutions which focus on IMO’s capacity-building work to support the implementation of the SDGs.

The first resolution covers the linkages between IMO’s technical assistance work and the 2030 Agenda for Sustainable Development and requests the Technical Cooperation Committee to give high priority to those activities which not only promote the early ratification and effective implementation of IMO instruments but also contribute to the attainment of the SDGs, taking into account the special needs of the least developed countries (LDCs) and small island developing States (SIDS) and the particular maritime transport needs of Africa.

The second outlines guiding principles of IMO’s integrated technical cooperation programme in support of the 2030 Agenda for Sustainable Development. It urges Member States to ensure the integration of maritime issues within their United Nations Development Assistance Frameworks (UNDAF) which will determine their national priority areas of funding and support for maritime technical assistance activities.

The third covers financing and partnership arrangements for an effective and sustainable integrated technical cooperation programme. It invites Member States, international and regional organizations, non-governmental organizations and industry to engage actively in the support of technical cooperation activities through voluntary cash donations to the TC Fund; financial allocations to IMO multi-donor trust funds; multi-bilateral arrangements; voluntary donations of interest earnings under the Contributions Incentive Scheme; and in-kind support through the provision of no-fee consultants, hosting of technical assistance events and the donation of equipment.

The Assembly recognized that the ongoing problem of marine plastic pollution required further consideration as part of a global solution within the framework of ocean governance. This is in line with the UN SDG 14 (Conserve and sustainably use the oceans, seas and marine resources for sustainable development) which has a target to prevent and significantly reduce marine pollution of all kinds, in particular from land-based activities, including marine debris and nutrient pollution by 2025.

IMO’s MARPOL treaty addresses garbage under its Annex V, which bans the discharge of plastics from ships into the oceans. The treaties which regulate the dumping of wastes at sea (London Convention and Protocol) also have role to play in addressing plastic in the oceans from land-based sources.

The Assembly recognized the role that the Organization has and continues to play in addressing this problem. The Assembly encouraged Member States, Parties to MARPOL Annex V and international organizations to submit concrete proposals to the next sessions of the Marine Environment Protection Committee and the meeting of the Parties to the London Convention and Protocol which meet during 2018.

The IMO Assembly welcomed the planned work within the IMO Maritime Safety Committee (MSC) to build on the already-adopted Polar Code and move forwards with looking at how vessels not currently covered by its requirements might be regulated in future.

The Polar Code, which entered into force on 1 January 2017 under both the SOLAS and MARPOL treaties, provides additional requirements for safe ship operation in polar waters and the protection of the polar environment.

The work on the second phase, to address other vessels, including fishing vessels and smaller ships not covered by the SOLAS treaty, will be initiated at MSC 99 in May 2018.

IMO number scheme extended to fishing vessels and other vessels

The Assembly agreed to extend the IMO Ship Identification Number Scheme to more vessels, on a voluntary basis, to support ship safety and pollution prevention by being able to more easily identify vessels.

Identifying and tracking fishing vessels operating at sea and being able to establish their ownership is an important part of ongoing work to tackle illegal, unreported, unregulated (IUU) fishing. IMO is working closely with the Food and Agriculture Organization of the United Nations (FAO) and the International Labour Organization (ILO) as well as other stakeholders, to tackle IUU fishing.

IMO is also encouraging States to ratify the Cape Town Agreement on fishing vessel safety, to bring this important treaty into force.

Port State control plays a crucially important role as the second line of defence against sub-standard ships. The Assembly adopted revised Procedures for Port State Control.
The resolution contains a comprehensive compilation of guidelines relevant to Port State Control. It updates the previous Procedures for PSC adopted in 2011 (resolution A.1052(27)). The revisions include, in particular, guidelines on the ISM Code; the certification of seafarers, hours of rest and manning; and procedures regarding voluntary early implementation of amendments to the 1974 SOLAS Convention and related mandatory instruments.

The Assembly adopted a resolution calling on States to consider ratifying a key treaty which will provide a global regime for liability and compensation in the event of an incident involving the international or domestic carriage by sea of Hazardous and Noxious Substances, such as chemicals, LPG and LNG.

Delegating the authority of issuing certificates of insurance

The Assembly adopted a resolution to allow for the delegation of authority to issue certificates of insurance under the International Convention on Civil Liability for Oil Pollution Damage, 1992 (the 1992 Civil Liability Convention) and the 2010 HNS Convention.

The resolution confirms that a State Party to the 1992 Civil Liability Convention or the 2010 HNS Convention can authorize an institution or an organization recognized by it to issue the certificates of insurance or other financial security required by these Conventions.

It also reminds States Parties that the delegation of authority to issue the certificates of insurance or other financial security required by the 1992 Civil Liability Convention and the 2010 HNS Convention would not affect the potential liability the delegating State may have in relation to those certificates.

The Assembly endorsed the decision of the IMO Council to strongly condemn recent missile launches by the Democratic People’s Republic of Korea which posed clear and serious danger to the safety of shipping in international trade.

Election of the IMO Council

The Assembly elected the 40-Member IMO Council for the next biennium 2018 to 2019 (see Briefing 35/2017). The Assembly directed the Council at its 120th session in June 2018 to examine the processes and procedures of the Assembly and Council, with a view to making suggestions for reform.

The newly elected Council met on 7 December and elected Mr. Xiaojie Zhang (China) as Chair for 2018-2019. The election of the Vice-Chair was postponed until July 2018. The Council expressed its deep appreciation for the outstanding efforts and achievements of the previous Chair, Mr Jeff Lantz (United States).

IMO Assembly
The 30th Assembly of IMO met in London at IMO Headquarters from 27 November to 6 December 2017. It was attended by some 1,400 participants, including 56 at the ministerial level, from 165 Member States, as well as observers from inter-governmental and non-governmental organizations and from the World Maritime University (WMU), the International Maritime Law Institute (IMLI).

The Assembly normally meets once every two years in regular session. It is responsible for approving the work programme, voting the budget and determining the financial arrangements of the Organization. It also elects the Organization’s 40-Member Council.