As piracy on the world’s seas continues to fall, new figures from the International Chamber of Commerce (ICC) International Maritime Bureau (IMB) highlight growing violence off the coast of West Africa, where 44 seafarers have been captured so far this year.

Worldwide, IMB recorded 37 piracy and armed robbery incidents in the first quarter of 2016, down from 54 in the same period last year. Three vessels were hijacked and 29 boarded, with 26 crew kidnapped for ransom and a further 28 held hostage.

With Nigeria and Ivory Coast accounting for two of the three hijackings recorded globally, and all 28 hostages, the Gulf of Guinea dominates world piracy in terms of numbers and severity. Additionally the region saw 16 crew kidnapped from chemical and product tankers in four separate incidents. Ten attacks were reported off Nigeria alone, all involving guns. 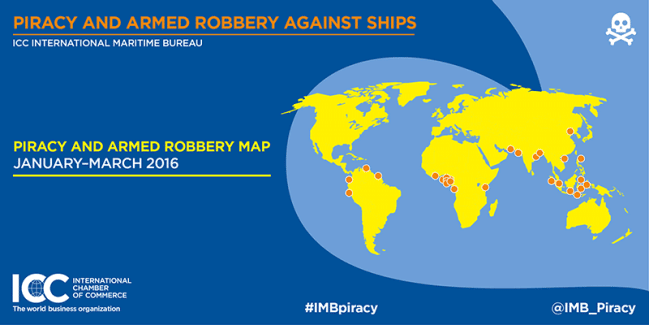 “Reports in the last quarter indicate unacceptable violence against ships and crews in the Gulf of Guinea, particularly around Nigeria. The current increase in kidnappings is a cause for great concern,” said Pottengal Mukundan, Director of IMB, who has monitored world piracy since 1991.

IMB’s Piracy Reporting Centre (PRC) warns all seafarers in the region to stay vigilant, maintain anti-piracy watches and take additional measures to prevent boarding. Armed groups have attacked vessels and their crews along the coast, rivers, anchorages, ports and surrounding waters – as well as up to 110 nautical miles out to sea this quarter. Bulk and vehicle carriers have been targeted as well as vessels associated with the oil industry.

Reports in the last quarter indicate unacceptable violence against ships and crews in the Gulf of Guinea, particularly around Nigeria. The current increase in kidnappings is a cause for great concern. 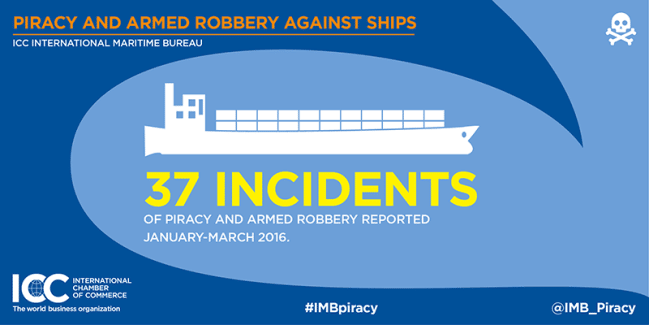 IMB noted ten incidents off India in the first quarter of 2016. The seaport Kandla in Western India reported seven of these – more than for the whole of 2015. They were predominantly low-level thefts by groups of armed robbers targeting anchored vessels.

No small product tankers have been hijacked in South East Asia so far in 2016, after a spate of attacks between April 2014 and August 2015. “Actions taken by the Malaysian and Indonesian authorities against pirate gangs in 2015 appear to have had the necessary deterrent effect,” said Captain Mukundan.

Indonesia recorded four low-level thefts. This is a noticeable reduction compared to the 21 incidents noted in the first quarter of 2015.

The Philippines was the location of the third hijacking this year, after the two product tankers hijacked off West Africa. Pirates attacked a tug and coal-carrying barge off Omapoy Islands in March. The barge was cast off and ten crew members kidnapped from the tug. The tug was recovered by the Philippine Police and the still-laden barge recovered a week later by the Malaysian Maritime Enforcement Agency (MMEA).

No pirate attacks have been recorded off Somalia. However, as of 31 March 2016, suspected Somali pirates continue to hold 29 crew members for ransom. IMB PRC advises shipmasters to stay vigilant and follow the industry’s Best Management Practices while sailing through these waters especially as the situation onshore in Somalia remains fragile and the threat of Somali piracy has not been eliminated.

IMB offers the latest piracy reports free of charge. To request a PDF version of the report by email, please click here .

Latest attacks may also be viewed on the IMB Live Piracy Map .