Kidnapping and hostage-taking persists off the coasts of West Africa and South East Asia, despite a 20-year low in piracy on the world’s seas, according to new figures from the International Chamber of Commerce (ICC) International Maritime Bureau (IMB).

IMB’s latest global piracy report shows that pirates armed with guns or knives took 110 seafarers hostage in the first nine months of 2016, and kidnapped 49 crew for ransom. Nigeria, a growing hotspot for violent piracy and armed robbery, accounts for 26% of all captures, followed by Indonesia, Malaysia, Guinea and Ivory Coast. 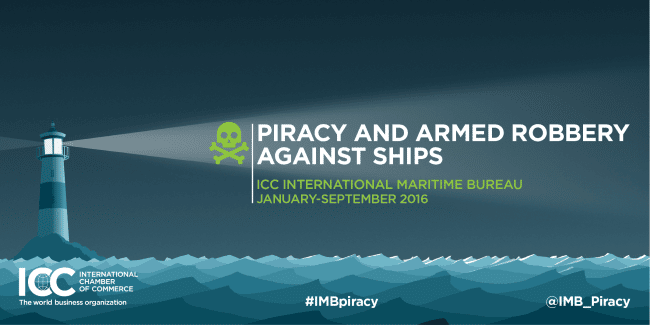 But with just 42 attacks worldwide this quarter, maritime piracy is at its lowest since 1996. IMB’s Piracy Reporting Centre (IMB PRC) has recorded 141 incidents so far this year, a 25% drop from the same period in 2015. A total of 111 vessels were boarded, five were hijacked, 10 were fired at, and a further 15 attacks were thwarted.

“We are encouraged by the efforts of national and international authorities – and the shipping industry – to keep piracy down. But clearly the threat to crew being taken hostage remains, and it is therefore necessary for shipmasters and response agencies to remain vigilant,” said Pottengal Mukundan, Director of IMB, which has monitored world piracy since 1991. 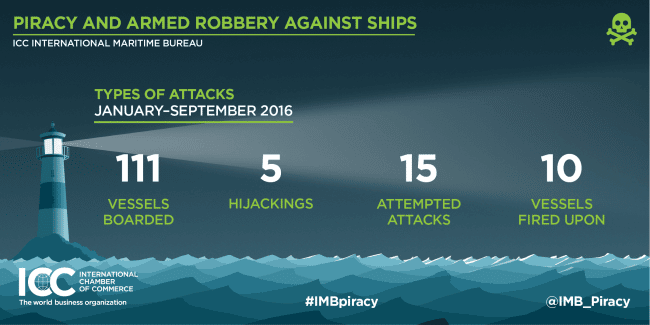 The IMB report shows one factor in reducing global numbers is a huge drop in low-level incidents off Indonesia. Though Indonesia still accounts for 34 of the 110 seafarers taken hostage this year, the total number of attacks has plummeted. IMB recorded 33 attacks off Indonesia in the first nine months of 2016, down from 86 for the corresponding period in 2015. Patrols by the Indonesian Marine Police appear to be working, says IMB PRC, who will continue to monitor high-risk areas and work closely with the region’s authorities.

Vietnam has reported similar improvements, with six incidents so far in 2016 – four of them in Vung Tau – compared with 19 during the same period last year. 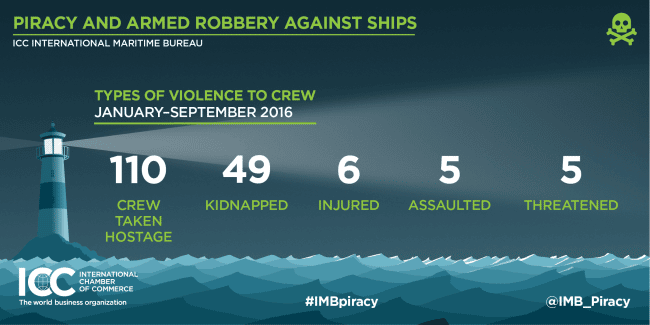 More vessels of all types are being targeted by armed groups along Nigeria’s rivers, anchorages and ports, and up to 118 nautical miles from the coast. Though many attacks are believed to go unrecorded, IMB received reports of 31 incidents in the first nine months of 2016, up from 12 in the same period last year.

In the latest of these, pirates armed with AK47 rifles attacked and boarded a general cargo ship en route from Onne (Nigeria) to Douala (Cameroon), stealing property and cash and damaging accommodation. The master activated the Ship Security Alert System (SSAS), and all crew retreated into the citadel. Alerted by the ship’s managers, IMB PRC requested urgent assistance from the Nigerian navy, who intercepted and boarded the ship. 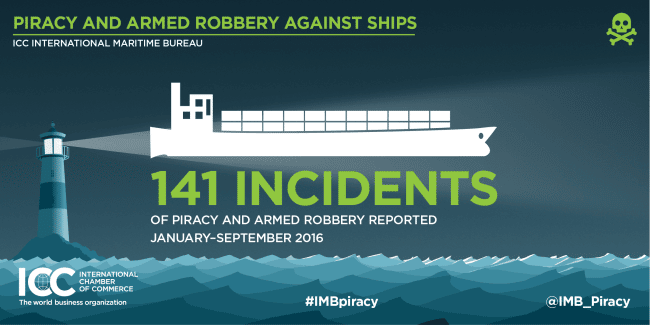 But in other Nigerian attacks so far this year, 13 people have been taken hostage onboard, and 29 kidnapped for ransom. In one boarding in July, five crew were captured and the chief officer shot in the head.
Worldwide over the past nine months, five crewmembers were assaulted, six were injured, and five threatened.

As for Somalia, zero incidents were recorded this quarter and just one attempted attack was recorded in the Gulf of Aden in the first nine months of 2016. But the situation ashore in Somalia, from where the pirate vessels set off, remains fragile. Mr Mukundan called on shipmasters to follow the industry’s Best Management Practices and continue to remain vigilant as they sail through waters off Somalia. 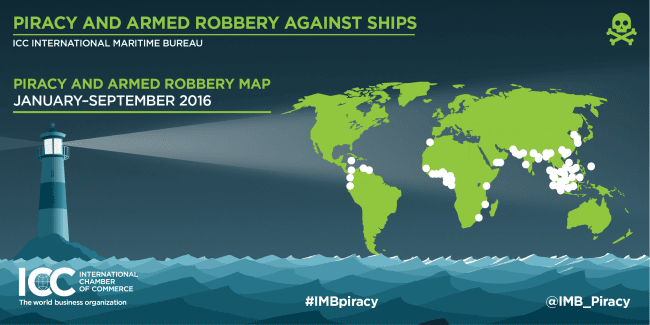 The report gives details of all 141 attacks in 27 countries, and advice for mariners, including a list of particularly high-risk areas where extra caution and precautionary measures are vital.