Pirates and armed robbers attacked 43 ships and captured 58 seafarers in the first quarter of 2017, slightly more than the same period last year, according to the latest ICC International Maritime Bureau (IMB) piracy report. 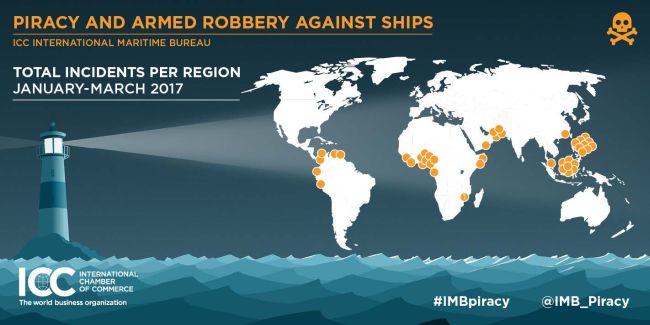 In total, 33 vessels were boarded and four fired upon in the first three months of 2017. Armed pirates hijacked two vessels, both off the coast of Somalia, where no merchant ship had been hijacked since May 2012. Four attempted incidents were also received.

Of the 27 seafarers kidnapped worldwide for ransom between January and March 2017, 63% were in the Gulf of Guinea. Nigeria is the main kidnap hotspot, with 17 crew taken in three separate incidents, up from 14 in the same period last year. All three vessels – a general cargo ship, a tanker and a bulk carrier – were attacked while underway 30-60 nautical miles off the Bayelsa coast. Three more ships were fired upon at up to 110 nautical miles from land, and many other attacks are believed to go unreported.

“The Gulf of Guinea is a major area of concern, consistently dangerous for seafarers, and signs of kidnappings increasing. IMB has worked closely with the response agencies in the region including the Nigerian Navy which has provided valuable support, but more needs to be done to crack down on the area’s armed gangs,” said Pottengal Mukundan, Director of IMB. “We urge vessels to report all incidents so that the true level of piracy activity can be assessed.” 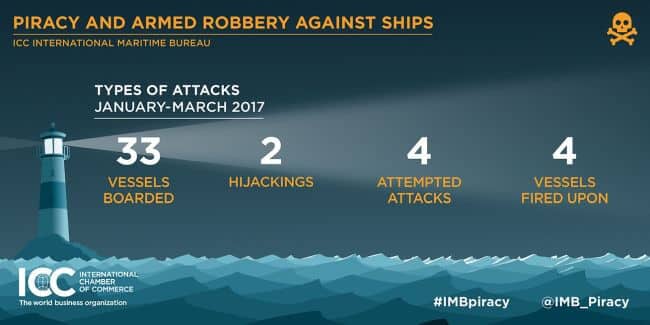 Growing violence around the Southern Philippines

Here, nine ships reported attacks in the first quarter of 2017 compared with just two in the same period last year. These include an armed attack on a general cargo vessel in which two crew were killed and five kidnapped for ransom. Kidnappers captured five more people in attacks on a fishing trawler and a tug.

According to IMB, militant activity may be behind the escalating violence in waters around the Southern Philippines. Armed groups use speedboats to target seafarers and fishermen in slow-moving, low vessels.

Areas such as the Sulu Sea and Sibutu Passage are particularly risky. IMB recommends that ships avoid these waters by transiting West of Kalimantan, if possible – and, as ever, follow the industry’s latest best practice measures, to protect against attacks. 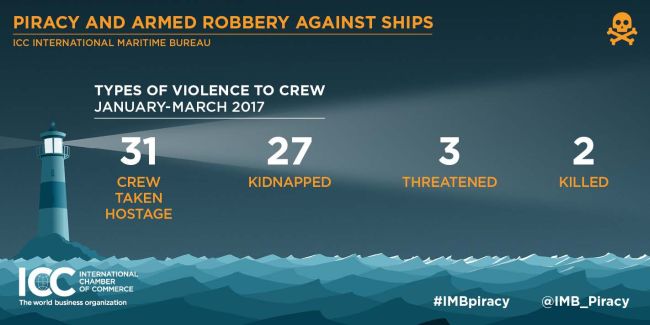 Somali pirates successfully hijacked a small bunkering tanker and a traditional dhow, both within their territorial waters. A total of 28 crew were taken hostage and subsequently released within a relatively short time. IMB suspects that these incidents were opportunistic, particularly as the hijacked vessels were not following the Best Management Practices for Protection against Somalia Based Piracy (BMP4) recommendations.

“IMB continues to encourage all vessels transiting waters around Somalia to follow the BMP4 recommendations. The recent attacks should serve as a warning against complacency, as Somali pirates are still capable of carrying out attacks,” said Mr Mukundan.

“The presence of international navies who patrol these waters is extremely important as it provides an added layer of deterrence to the pirates and more importantly helps to secure one of the most important trade routes of the world,” he added.

The IMB Piracy Reporting Centre supports the anti-piracy efforts of international navies by relaying all reports to the response agencies, as well as broadcasting alerts to ships via the INMARSAT Safety Net Service. 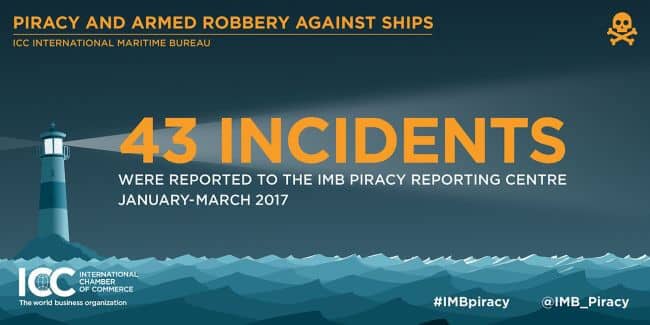 IMB’s latest piracy report gives detailed descriptions of all 43 attacks in 16 countries, and advice for mariners, including a list of particularly high-risk areas where extra caution and precautionary measures are vital.