Piracy and armed robbery on the world’s seas is persisting at levels close to those in 2014, despite reductions in the number of ships hijacked and crew captured, the International Chamber of Commerce (ICC) International Maritime Bureau’s (IMB) annual piracy report reveals.

IMB’s Piracy Reporting Centre (IMB PRC) recorded 246 incidents in 2015, one more than in 2014. The number of vessels boarded rose 11% to 203, one ship was fired at, and a further 27 attacks were thwarted. Armed with guns or knives, pirates killed one seafarer and injured at least 14. Kidnappings – where crew are taken away and held for ransom – doubled from nine in 2014 to 19 in 2015, all the result of five attacks off Nigeria.

A total of 15 vessels were hijacked in 2015, down from 21 in 2014, while 271 hostages were held on their ships, compared with 442 in 2014. No hijackings were reported in the last quarter of 2015. IMB says one key factor in this recent global reduction was the drop in attacks against small fuel tankers around South East Asia’s coasts, the last of which occurred in August 2015. 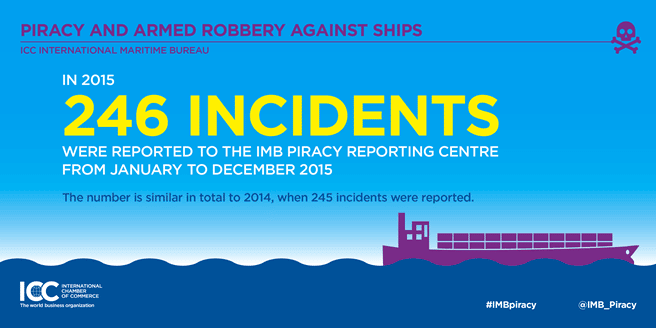 “IMB particularly commends the robust actions taken by the Indonesian and Malaysian authorities in the arrest and prosecution of two gangs that hijacked tankers. We also applaud the subsequent arrest of some of the alleged masterminds,” said Pottengal Mukundan, Director of IMB, which has monitored world piracy since 1991.

However Mr Mukundan urged shipmasters to maintain strict anti-piracy and robbery watches. South East Asia still accounts for most of the world’s incidents. Almost 55% of the region’s attacks were against vessels underway compared to 37% in 2014. Most were aimed at low-level theft. IMB cites this rise on moving vessels as a cause for concern as it increases potential risks to the vessels and their crew.

The IMB PRC continues to work closely with the Indonesian Marine Police and other Indonesian authorities to monitor high-risk areas. Reports have reduced in the majority of the 11 designated anchorages with only Belawan and Nipah recording marked increases in attempted thefts, reporting 15 and 26 incidents respectively in 2015.

IMB particularly commends the robust actions taken by the Indonesian and Malaysian authorities in the arrest and prosecution of two gangs that hijacked tankers.

Nigeria is a hotspot for violent piracy and armed robbery. Though many attacks are believed to go unrecorded, IMB received reports of 14 incidents, with nine vessels boarded. In the first of these, ten pirates armed with AK47 rifles boarded and hijacked a tanker and took all nine crewmembers hostage. They then transferred the fuel oil cargo into another vessel, which was taken away by two of the attackers. The Ghanaian navy dispatched a naval vessel to investigate as the tanker moved into its waters, then arrested the pirates on board. 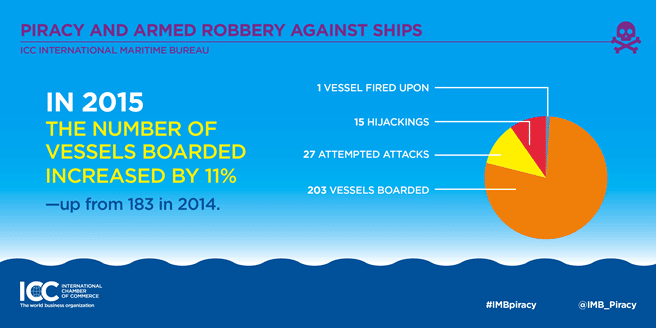 No Somali-based attacks were reported in 2015. Following a new 55% reduction in the industry-defined High Risk Area, IMB warns vessels transiting the Gulf of Aden and Indian Ocean to stay particularly vigilant.

Mr Mukundan explained: “Somalia remains a fragile state, and the potential for an attack remains high. It will only take one successful hijacking to undo all that has been done, and rekindle this criminal activity.” 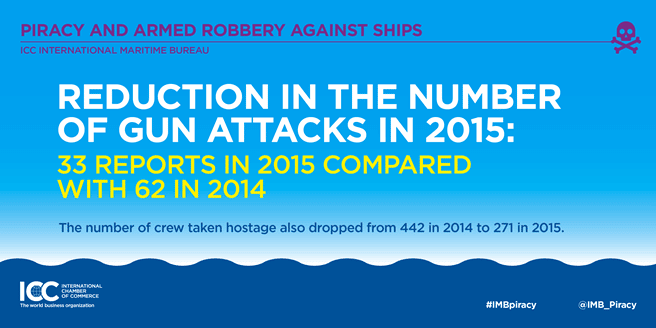 Incidents in Vietnam surged from seven in 2014 to 27 in 2015. The main cause is low-level theft against vessels anchored in Vietnam, with 15 reports from around the port of Vung Tau alone.
In China four incidents were recorded in December 2015, the first in a long time. These include three thefts of bunker diesel oil from large bulk carriers off Tianjin, and one failed attempt to do the same. 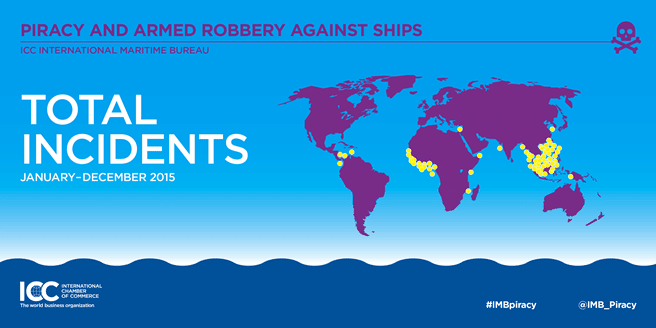