A single MAN B&W 6G50ME-GI two-stroke engine powers the 50,000 dwt bulk carrier, which has also been verified to be in compliance with the International Gas Fuel (IGF) Code by Lloyds Register and the Korean Register. The Ilshin Green Iris has been chartered by steelmaker, POSCO, to transport limestone cargoes in the Korean coastal trade. 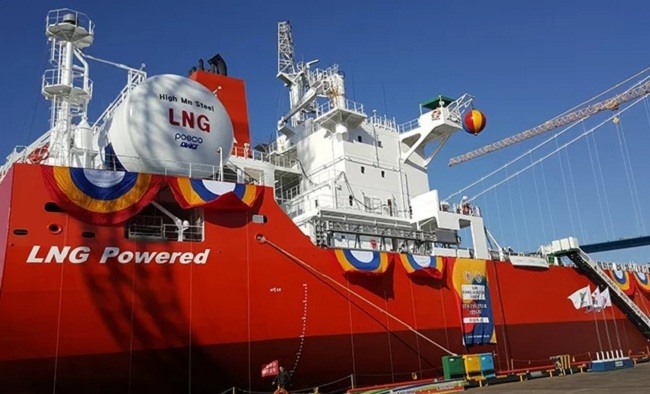 Bjarne Foldager – ‎Vice President, Sales & Promotion, Two-Stroke Business at MAN Diesel & Turbo – said: “We are very pleased to be part of this exciting project and to see our dual-fuel ME-GI engine win favour in yet another market segment. We look forward to following its progress.”

The Ilshin Green Iris has a Type ‘C’ LNG fuel tank with a capacity of 500m³ and comprised of a material – high-manganese austenitic steel – newly developed by POSCO that is specially designed for cryogenic LNG and liquefied gas-storage applications.

With the ME-GI engine, two-stroke development has taken a step further by combining the unique properties of multi-fuel combustion and the well-known reliability of Man Diesel & Turbo’s ME-engine. The Diesel principle provides the ME-GI engine with high operational stability and efficiency, including during load changes and fuel change-over, while defining properties such as a stable change-over from fuel to gas with no fuel-penalties are maintained. The negligible methane slip of the ME-GI engine makes it the most environmentally friendly, two-stroke technology available.