Online freight forwarder iContainers says that mergers and acquisitions activities for shipping carriers are likely to slow down in 2018. Instead, this is likely to pivot to freight forwarders, where the industry can expect to see an increase in M&A talks.

Following an unprecedented number of mergers and acquisitions over the past few years, iContainers says this trend can now be expected to ebb. 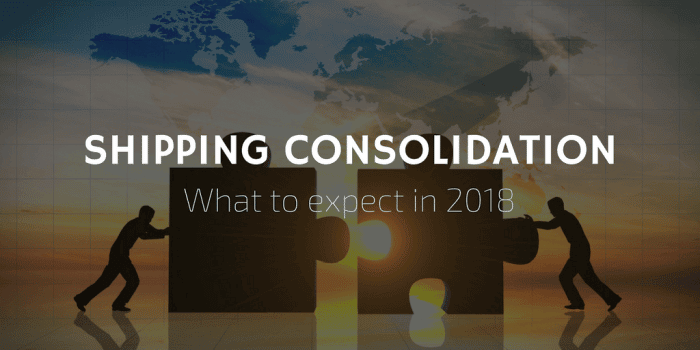 “In terms of carriers, I doubt we will see any more movements in the near future. I don’t see any major players breaking right now. Any acquisitions that were to take place now would be a purely strategic move, or if an opportunity presents itself for one of the bigger carriers to buy up a younger one.” says Klaus Lysdal, Vice President of Sales & Operations at iContainers.

Amid a prolonged market downturn, many carriers resorted to forming alliances and setting agreements on slot purchases. These allowed them to gain cost-effectiveness by combining their resources without risking further debt. Such movements have had its effects trickle down to shippers.

“We’ve seen so many consolidation activities that there are now a lot fewer options for shippers to choose from and less flexibility with the number of carriers so dramatically reduced,” explains Mr Lysdal.

“But on the other hand, the good thing that has come out of all of this is some very much-needed rate increases to make the industry healthier overall.”

One to second that thought is SeaIntelligence Consulting’s CEO, Lars Jensen. On a special visit to iContainers earlier this year, Mr Jensen remarked that the limited number of supercarriers left to make any further major consolidation efforts unlikely.

“We’re now down to only seven supercarriers. I don’t think anything is going to happen up there anymore. There might be some that want to merge, but I’m not sure that the competition authorities are going to allow it,” says Mr Jensen.

“Long-term, Hyundai and Yang Ming are not going to be viable in their present states. They’re too large to become niche carriers and too small to become supercarriers. They will transform or disappear in some way, shape, or form. Yang Ming is likely to be absorbed into Evergreen, even though Evergreen hates the idea. Hyundai will persist as long as the Korean government wants to subsidize them,” adds Mr Jensen. “And eventually, they might tire of that.”

Mr Jensen says that the shift may be moving down the line to the smaller carriers, where hundreds of small and medium-sized carriers will be starting to stir and probably where the consolidation game will ramp up over the coming years.

“The capacity operated by these carriers have skyrocketed. And it’s not because they were operating more ships. It’s because they were redelivering smaller charter vessels and taking larger ones on. There’s no way they can all fill the ships that way. So there will be a consolidation with these small and medium-sized carriers.”

Smaller carriers aside, Mr Lysdal says freight forwarders may also be mimicking the move and engaging in their own M&A activity for strategic growth purposes.

“We could see the mid- and large-ranged forwarders acquire tech-savvy companies as a shortcut into the digital market, then add additional services to their portfolio. This gives them more of a headstart and a foundation to start from rather than build their own set up from scratch,” said Mr Lysdal.

“I think we will see that the top players will be watching and observing from the sidelines for a while. Once they see someone really make a breakthrough, that’s when they make their move.”