The massive 336-metre long FPSO, named Ichthys Venturer, is longer than three soccer fields and is an engineering masterpiece, designed for 40 years of operations without dry dock.

“The safe and efficient mooring of the Ichthys Venturer in the 250-metre deep waters of the Ichthys Field heralds another successful milestone for the INPEXoperated Ichthys LNG Project,” Mr Louis Bon, Managing Director Ichthys Project stated. 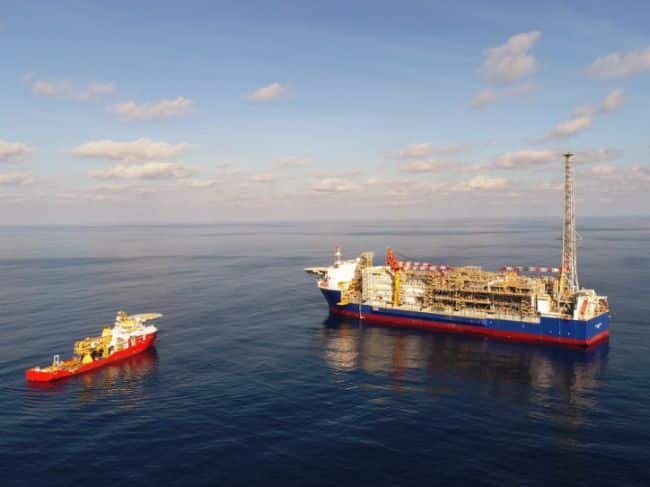 “Completing the complex operation of connecting 21 pre-installed mooring chains, weighing more than 15,000 tonnes, from the seabed to the FPSO is testament to the well-coordinated work of our personnel, including contractors and subcontractors from around the globe,” Mr Bon said.

The FPSO has been designed to process and store most of the condensate delivered from the Ichthys LNG Project’s central processing facility, Ichthys Explorer, before periodically offloading it to carriers for export to market.

The Ichthys Venturer is moored 3.5 kilometres away from its sister offshore facility, Ichthys Explorer, and together they represent some of the largest and most advanced offshore facilities in the world.

“Ichthys Venturer has a storage capacity of 1.12 million barrels of condensate and will have a continuous operating life of 40 years, setting new benchmarks for durability,” Mr Bon advised.

“The FPSO will now undergo hook-up and commissioning to support the safe and reliable start-up of Ichthys Venturer’s operations,” Mr Bon stated.

International Maritime Prize For 2016 Presented To Former Secretary General Of IMO
Want to share your tips and advice? Got questions? Visit the community forum to ask questions, get answers, meet people, and share your tips!