Most recently, the issue of migrant losses in the Mediterranean has captured the media and political spotlight, but this is just one important factor in what is a much wider maritime human rights landscape.

The HRAS advocacy campaign will be structured around numerous HRAS vanguard initiatives that aim to develop maritime human rights by providing objective case studies, academic interpretations and model documentation for international consideration and voluntary use.

Founder of Human Rights at Sea (HRAS), David Hammond, writes: “12 months ago, the now recognisable term of “Human Rights at Sea” did not exist; neither did an international advocacy platform highlighting this fundamental issue specifically in the maritime environment.

Today, Human Rights at Sea leads public discussion on the topic which is expanded through its numerous international projects aimed at supporting the human element, without which global maritime transport of goods and provision of services, as well as the fishing of essential food resources, could not occur. 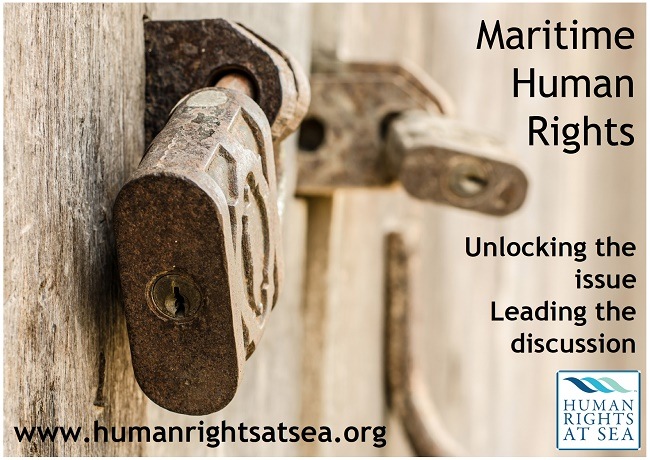 Human Rights at Sea is therefore pleased to announce the commencement of its long-term international advocacy campaign aimed at “Unlocking the issue” of open and explicit discussion concerning the application, enforcement and development of measures addressing human rights issues amongst the maritime and fishing industries, their respective supply chains and their global supporting communities.

This includes among other related initiatives, kick-starting the discussion on the need for driving up international maritime standards for effectively combating abuses at sea; be it the enslavement of fishermen in blue water fleets, the suspicious disappearance and murder of seafarers, safeguards for foreign crewed vessels, accountability of flag States for abuses on their ships, wider development of maritime CSR policies on behalf of the human element, and the prosecution of abusers in national courts.

Since its inception in April 2014 Human Rights at Sea has publicly stated that in this current day and age, the application and understanding of human rights in the maritime environment by application of “Fundamental Rights”, is insufficient.  For example, most seafarers and fishermen have not heard of, nor understand the State implications of the Universal Declaration of Human Rights 1948.

A recent Crewtoo survey published on 12 March 2015 asked the question: “Do people care about Seafarers Human Rights?” 65% responded No. 35% responded Yes. This says much about how seafarers view the support shown by employers and representative bodies alike.

More worrying is the trend by some shipping bodies and individuals in perpetuating the common myth that the Maritime Labour Convention 2006 is a Human Rights convention which provides all the protections required for seafarers’ human rights. This provides a false sense of security to seafarers covered by the Convention and highlights at best a misinterpretation by professional bodies and individuals in positions of influence.

As a matter of leadership, Human Rights at Sea now calls for open and explicit discussion for the inclusion and application of human rights driven forward as a constituent part of the IMO’s Strategic Plan and associated High Level Action Plans, as well as by individual flag States and shipowners in both the maritime and fishing industries.  There is no reason not to and a new strategic approach to corporate inclusion of maritime human rights in daily business which does not inherently consider the subject to be a toxic ‘Pandora’s box’ needs to be adopted by the international maritime community.

I am delighted with the progress Human Rights at Sea has made in only 12 months; much of which is owed to the growing level of international support for our pro bono development programmes, initiatives and model documentation being developed for voluntary use by all.”