You are here: Home › Shipping News › HII: Now Is The ‘Most Exciting Time’ In Shipbuilding In 30 Years
TwitterFacebookLinkedInPinterestBuffer

Congress and the Pentagon are in the midst of a two-year spending spree, and Huntington Ingalls Industries (HII) leadership is positioning the shipbuilder to capture as many contract awards as possible before the funding window closes, perhaps as early as the Fiscal Year 2020. 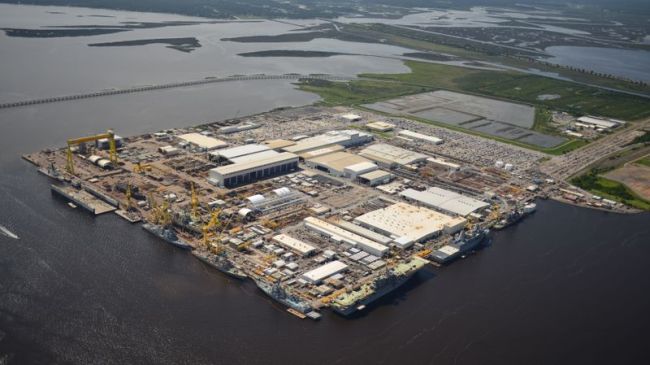 The FY 2019 National Defense Authorization Act gained Senate approval this week, just ahead of a quarterly earnings call Thursday morning by HII President and CEO Mike Petters in which he detailed the company’s near-term strategy with Wall Street analysts. Congress opened the checkbook in 2018 and 2019, but Petters said its unclear whether the increased spending will carry on through the next budget cycle.

For the quarter, HII reported revenues of $2 billion, compared to revenues of $1.6 billion a year ago. The revenues increase was due to increased work at the company’s Newport News Shipbuilding facility that builds carriers and parts of the Virginia-class submarines and refurbishes existing U.S. aircraft carriers. Earnings for the quarter were $257 million, an increase from the $241 million reported a year ago, according to the HII second quarter financial report.

“This is the most exciting time I’ve seen in shipbuilding in 30 years,” Petters said. “If you step back and just look at what we’re doing now, we have an offer in to the Navy to build two aircraft carriers. Our team has an offer into the Navy to build 10 submarines. And we are in a competition for a share of 10 destroyers.”

The Navy is evaluating bids for a new guided-missile frigate, with a request for proposals expected next year and a contract award anticipated in 2020, Petters said. HII’s Ingalls Shipbuilding submitted a bid for the work but has not announced any details. Also, Congress and the Pentagon are considering a multi-year plan for buying more San Antonio-class amphibious warship, Petters said. 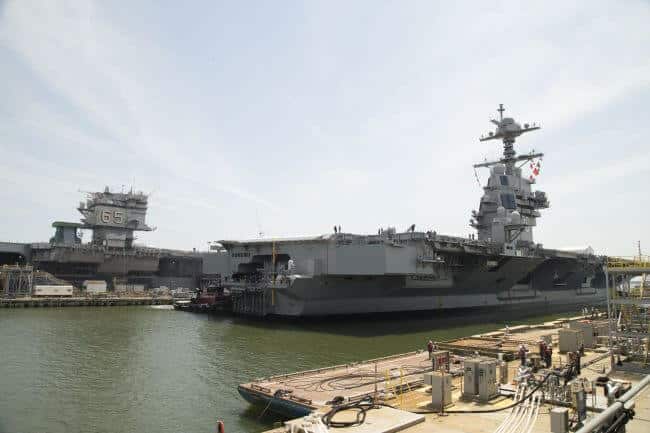 “Is this an indication of a new sustained level for the business, or is this just going to be the rat in the snake where we have a lump in the business that we’re going work over the next five to ten years?” Petters said. “The job right now is to get the lump under contract, and then we go figure out how do we keep it at that sustained level.”

When considering both the FY 2018 and FY 2019 Department of Defense budget requests and appropriations, this two-year period increased the amount of money spent on shipbuilding to a point HII leadership is confidently predicting annual revenue growth of at least 3 percent for the next several years.

“This two-year window is really special for shipbuilding. There’s a big question, really, about what happens in ’20? Sequestration kicks back in; what happens after that?” Petters said. “Our view is that a lot of the work we’re going to get under contract before ‘20 puts us in a pretty unique place.”

If the same type of spending continues in 2020, 2021 and later years, then the business will be even better, Petters said. But just because HII is bidding on ship programs, including those already built by the company, doesn’t mean the Navy will offer new awards to the shipbuilder.

The Navy’s bidding process for its anticipated purchase of 10 Flight III Arleigh Burke guided-missile destroyers is being run differently than before, which is why HII officials are optimistic but yet also somewhat unsure about how the contract awards will shake out.

“We had to price several different schedules and quantities of ships,” said Chris Kastner, HII chief financial officer. “For us, it created a circumstance in the proposal, basically, if you want the ships faster, there’s an opportunity to do that.”

Meanwhile, HII has kept the cost of the future USS John F. Kennedy (CVN-79) within expectations, and the company expects launch will occur by the end of 2019, which is ahead of schedule. The company has a proposal to build the next two carriers under one contract, which he said would further reduce costs because of more efficient use of labor and bulk buys of building materials. 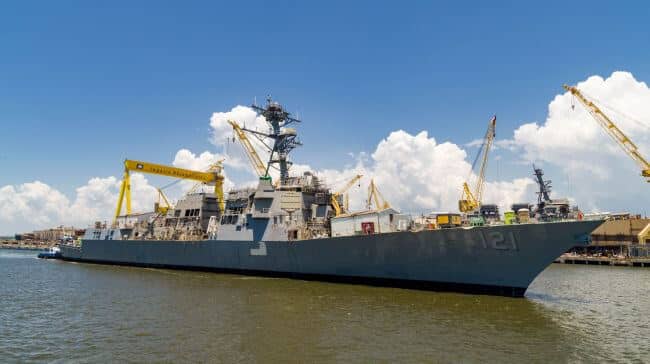 “We are not across the goal line, and we’ve been around long enough to know you do not get points until you’re across the goal line,” Petters said. “As far as the longer-term view, I’m encouraged to think that we’ll be able to get contracts for all of these ships over the next year to 18 months, and that will set the shipbuilding piece of our business up for the next five to 10 years. I’m very encouraged about that.”