The shipyard tasked restoring the guided-missile destroyer USS Fitzgerald (DDG-62) was awarded a $29.4 million for the initial planning work to repair the warship, according to a recent Pentagon contract announcement.

The service announced the ship would be repaired at Huntington Ingalls Industries yard in Mississippi in August. 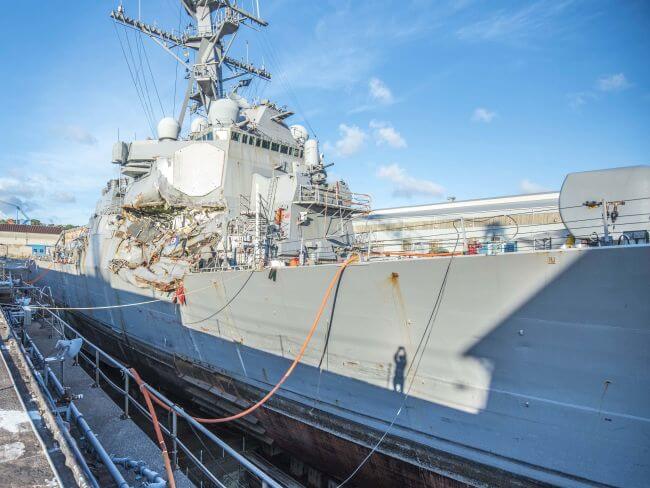 Fitzgerald collided with a merchant ship on June 17 resulting in the death of seven sailors in a shipping channel off the coast of Japan. In addition to a hole punched in the ship below the waterline, the collision damaged to several high-end electronic systems, such as the integrated radio room on the ship and the starboard forward array of the ship’s A/N-SPY1D(v) air search radar.

“This initial planning and preparation phase of an availability will include a combination of restoration and modernization of USS Fitzgerald,” read the announcement.
“USS Fitzgerald is planned to arrive at Ingalls Shipbuilding in December 2017 via heavy lift ship.”

The service is set to award a modification to cover the full restoration in December, the announcement said.

According to an early Navy estimate obtained by USNI News, the total cost of the repair to Fitzgerald is about $367 million — to include the transport and refurbishment. The repair will take more than a year and be paired with a planned modernization for the ship that was planned before the collision.

The Navy is also evaluating repairs to USS John S. McCain (DDG-56) that was struck by a merchant tanker on Aug. 21 off of Singapore that resulted in the death of ten sailors. The ship set to be taken to the U.S. naval base in Yokosuka, Japan by heavy-lift transport for further evaluation. Early estimates put the repair cost at $223 million. It’s unclear if the ship will have to be transported back to the United States.