H Henriksen of Norway has received SOLAS certification for a new off-load single-point boat lifting hook capable of holding up to 22.5-tonnes. The quick release hook has been developed principally for use with heavy workboats while a smaller hook has received SOLAS certification for 8-tonnes, making it ideal for the deployment of emergency rescue boats and heavy duty rigid inflatable boats.

The new Henriksen hooks have been developed to include a pivot mechanism so that they can perform to their full load capacity even when the boat is at an angle to the lifting cable. It has been recognised that in rough sea conditions lateral loads can impose significant strains upon a hook so the specially designed swivel featured in the new models enables them to accept a load from any direction. 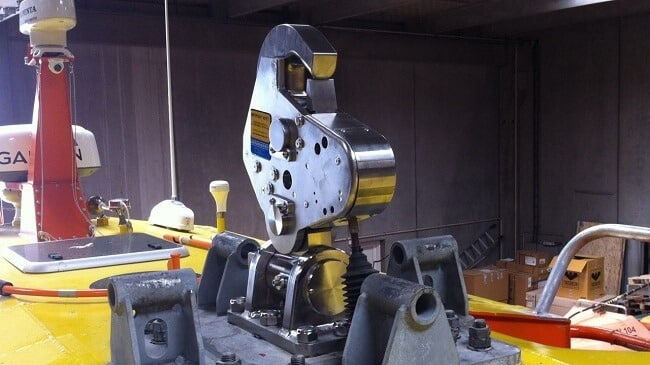 Both hooks have been tested to confirm that they are capable of holding loads up to six times greater than their certified capacity. During development at the Henriksen factory beside the Oslo fjord, the 22.5-tonne hook was tested to 160-tonnes before it eventually broke.

Due the company’s 100 per cent safety performance history H Henriksen is generally acknowledged as the world leader in the manufacture of single point off-load lifting hooks. These types of hook are used extensively throughout the world as they represent the safest, fastest and most efficient way of launching rescue boats and other craft in difficult sea conditions. Safety design is such that when the boat has been lifted and swung out from its cradle and is being lowered to the sea, only then can a crew member remove a safety pin and release the hook handle. As soon as the boat is water borne and its weight comes off the cable, the hook opens automatically.

With the entire weight of the boat and the lives of its crew being dependent upon a single, relatively small piece of metal, Henriksen engineers believe that boat operators should always pay close attention to the long term stresses to which their hooks are exposed. This means that they should never be tempted to cut corners with the metallurgical quality of any hooks they install nor with their scheduled maintenance. Henriksen hooks can be serviced and re-certified for use after five years and being manufactured in Norway to the highest Scandinavian standards of metallurgy and engineering they reflect the company’s continuous commitment to the science of safety.