You are here: Home › Shipping News › Helsinki Becomes The Busiest Passenger Port In Europe In 2017
TwitterFacebookLinkedInPinterestBuffer

Helsinki is the number one general port for international freight traffic in Finland. In 2017, Helsinki grew to become the busiest passenger port in Europe and possibly the entire world with 12.3 million passengers. Passenger numbers continued to increase on the Helsinki-Tallinn route in particular, reflecting the development of Helsinki and Tallinn into ‘twin cities’ with close economic and social ties. Meanwhile, liner traffic to Stockholm, St Petersburg and Travemünde remained stable, as it has for several years, while international cruise traffic increased significantly. 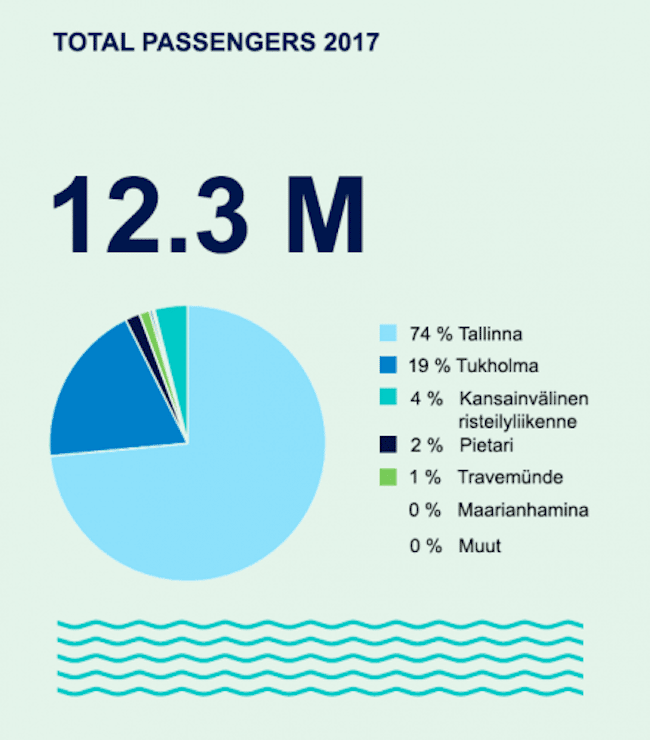 The highest passenger numbers in Europe

In 2017, the Port of Helsinki’s total number of ship passengers grew by 2.4% compared to the previous year. The number of liner traffic passengers alone grew by 1.8%, to 11.8 million. A total of 9 million passengers (+3.2%) passed between Tallinn and Helsinki, while 2.3 million (-0.1%) passed between Stockholm and Helsinki. During the year, Helsinki also recorded 266 international cruise ship visits and 478,000 (+ 16.8%) cruise ship passengers, which was an all-time record.

The united economic area formed by Helsinki and Tallinn is based in part on flexible and frequent ferry traffic between the two cities. One of the latest trends in the area is the increasing popularity of Finland and the Baltic Sea among Asian tourists in particular.

The Port’s impact on the Helsinki metropolitan area’s tourist services, hotel and restaurant industries, transportation and retail trade is significant. Marine passengers bring over EUR 805 million to the Helsinki region annually, and the combined total revenue generated by operations related to the Port is approximately EUR 1.6 billion. Taking into account the local multiplier effect, port-related operations provide jobs for a total of 15,000 employees. (Helsingin sataman vaikuttavuustutkimus 2016 (Port of Helsinki Impact Assessment 2016, in Finnish).

The busiest general port in Finland for international freight traffic

The Port of Helsinki Ltd is the busiest passenger port in Europe. We create a seamless framework for sea traffic to destinations such as Tallinn and Stockholm. The Port of Helsinki is also Finland’s leading general port for international cargo traffic, serving the business world and well-being of the Helsinki region and the whole country.