Hartmann Reederei, the German ship-management company, has confirmed that two of its vessels – the 36,000 m3 LEG (liquefied ethylene gas) carriers ‘Gaschem Beluga’ and ‘Gaschem Orca’ – powered by the world’s first ME-GIE (-Gas Injection Ethane) two-stroke engines have collectively accumulated 10,000 hours of operations since entering operation at the end of 2017.

The carriers were ordered by Hartmann and Ocean Yield of Norway and constructed at Sinopacific Offshore Engineering (SOE) in China with the intention of transporting ethane derived from US shale gas to European crackers for the production of ethylene.

Capt. Ulrich Adami, Fleet Manager of Hartmann Reederei, said: “We are grateful to MAN Diesel & Turbo for developing the ME-GI engine to burn ethane. The ME-GIE is very reliable and about 97-98% of our ships’ passage back and forth over the Atlantic has been on ethane. Our charterers are happy with the positive budget implications that have come with being able to exploit the fuel on board.” 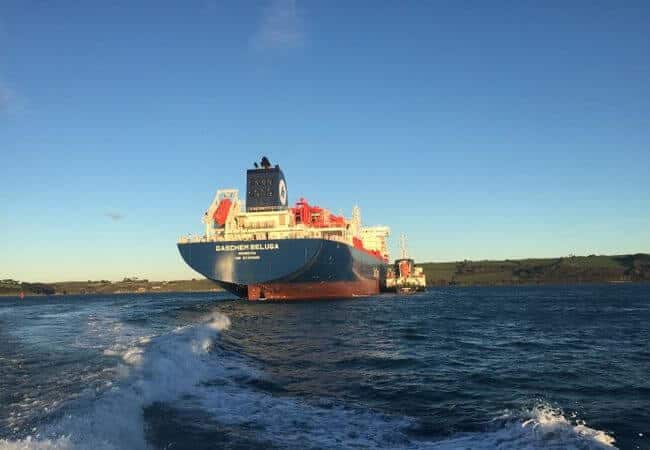 He continued: “You are always taking a risk with prototypes, in this case not just the engine but all the new features that were implemented into these vessels. But I was confident in all respects that we had reliable partners and we wouldn’t have any major issues, so the risk was mitigated.”

Adami concluded: “Overall, the propulsion system performs very well with an even better fuel consumption than predicted, and we are recording higher sea-passage speeds during heavy weather in the Atlantic. I believe the Gaschem Beluga and Gaschem Orca are among the fastest vessels over the Atlantic.”

René Sejer Laursen, Sales & Promotion Manager, MAN Diesel & Turbo said: “We’re very happy to hear the positive reports from Hartmann regarding fuel consumption for gas operation. We thank Hartmann for believing in our concept and are ourselves very happy with the performance of the ME-GIE engine.”

Laursen added: “Our inspections of the cylinder liners on both sides of the Atlantic have also shown that they still look like brand new. Regardless, we continue to look for ways to further improve the ME-GIE’s performance and are currently working on lowering pilot-oil consumption, which we ultimately expect to drop down to just 1%.”

Hartmann says that there is a potential demand for further vessels. Market reports also suggest that a number of Chinese concerns are looking into cracking ethylene with ethane as the feedstock, meaning that even more ships burning ethane will eventually come on-stream.

Hartmann is also a part of the JHW consortium that ordered 5 × 85,000 m3 Very Large Ethane Carriers (VLECs) in 2016, each to be powered by a single MAN B&W 6G60ME-GIE main engine. Upon construction, the vessels will be the largest ethane carriers ever constructed.

The two vessels are equipped with propulsion packages supplied by MAN Diesel & Turbo, Frederikshavn (Denmark) that also feature a remote control system AT3000, a VBS 1350 – ODS Mk5 CP propeller, a rudder bulb and a shaft generator with frequency converter that enables it to run on variable speed between 80 to 100rpm.

The benefits of the ME-GIE’s Diesel-type combustion is now fully exploited by its ability to operate on almost any gas quality – without any reduction in efficiency – and through a complete combustion maintained by a relatively high gas-injection pressure.

The engine can run on a mixture of LPG and methane, or ethane, with an unchanged gas-mode efficiency. Such a mixture may comprise as much as 50% LPG, while MAN Diesel & Turbo’s findings thus far indicate that an even greater LPG percentage can be used. The negligible methane/ethane/LPG slip of the ME-GI engine makes it the most environmentally friendly, two-stroke technology available.

The development of the ME-GI engine to burn ethane is part of the ‘Maritime Energy Transition’, an umbrella term that covers all MAN Diesel & Turbo activities in regard to supporting a climate-neutral shipping industry.

The term stems from the German expression ‘Energiewende’ and encapsulates MAN Diesel & Turbo’s call to action to reduce emissions and establish natural gases as the fuels of choice in global shipping. It promotes a global ‘turn to gas’, driven by the IMO, and a common approach by the shipping industry and politics to invest in infrastructure development and retrofits.

Launched in 2016 after COP 21, the initiative has since found broad support within the shipping industry and German politics.

MAN Diesel & Turbo sees significant opportunities in the development of the ME-GIE as the engine can also run on almost any form of waste gas. Such gases could be the light hydrocarbons or VOCs emitted from crude oil during storage and during the loading/unloading of crude oil. This opens the door for new applications for the engine in, for example, shuttle tankers, for power generation in remote power plants, or in off-shore applications – such as floating production storage and offloading vessels (FPSOs) – where VOC is abundant and poses a potential environmental hazard.

The ME-GIE engine features MAN Diesel & Turbo’s newly developed pump vaporizer unit (PVU) that matches the requirements for the supply of high-pressure LNG to the ME-GIE engine. The PVU supercedes previous fuel-gas supply systems with its low installation costs, smaller space requirement and full pump redundancy. Tier III operation can also be met in combination with SCR or EGR systems. The engine can be delivered in the 5-90 MW power range.