Hapag-Lloyd held a naming ceremony for the “Valparaíso Express”, the first of five new vessels in its new 10,500 TEU class, on december 7. Mrs. Rozío Gonzaléz, the wife of Mr. Andrónico Luksic, Chairman of the Board of the Quiñenco Group, performed the ceremony at the Terminal Pacifico Sur (TPS) in the port of Valparaíso, where the new ship will call regularly in future. 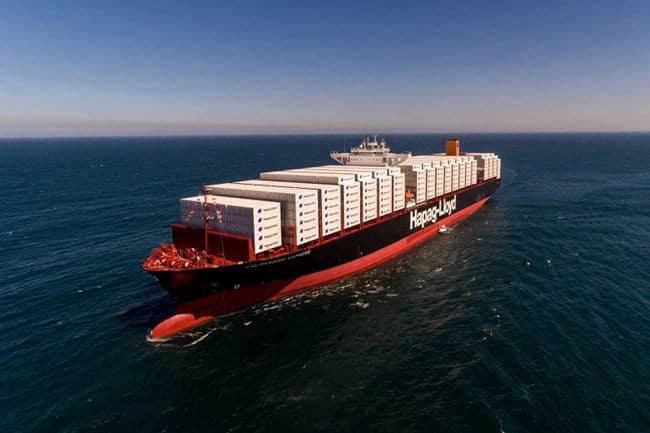 The Quiñenco Group is the largest shareholder of CSAV, one of the three controlling shareholders of the Hapag-Lloyd.

The first vessel in the new “Valparaíso Express” class will sail in the revised Europe – South America West Coast service of Hapag-Lloyd in which four of the five newbuildings are replacing older Panmax ships, while a second Panmax size loop (SW2) and two slot charter agreements (EW1 and EW2) in the same trade lane will be terminated.

This way Hapag-Lloyd can deploy more efficient vessels between North Europe and South America West Coast without adding significant capacity to the market. The new SW is a premium service in this trade covering the major markets in North Europe, the Caribbean and West Coast South America.

“The entry into the Post-Panmax ship class in this trade lane is ensuring that Hapag-Lloyd stays competitive as one of the market leaders after the expansion of the Panama Canal,” said Anthony J. Firmin, Chief Operating Officer at Hapag-Lloyd. “South America and especially Chile are very important markets for us and we will be able to serve particularly our reefer customers much better with the new ships.”

The second vessel from the series ordered in April 2015 was delivered to Hapag-Lloyd today at the Hyundai Samho Heavy Industries shipyard in South Korea. The remaining three ships are due for delivery by April next year.

The five units will set highest environmental standards and achieve particularly low figures for fuel consumption and emissions thanks to innovative on-board technology. All five ships will sail under the German flag and are classified by DNVGL. They are 333 metres long and 48metres wide (max. 19 rows of container side by side) and have a maximum capacity of 123,500 tonnes with a max. draft of 14 metres. From keel to superstructure they measure a height of 63.5 metres. The eight cargo holds (9 tiers of containers) and decks (9 tiers of containers) feature a total capacity of up to 10,593 TEU including 2,100 plugs for reefer containers.

Exclusive insights into our new vessel, the Valparaiso Express, capable of carrying up to 10,500 TEU! #HLPassion pic.twitter.com/8aNiEi8Wpa