Hapag-Lloyd held the naming ceremony in Hamburg today for the “Guayaquil Express,” the fourth of five newbuildings in its 10,500 TEU class. The patron is Christine Kühne, wife of Klaus-Michael Kühne, majority shareholder and Honorary Chairman of Kühne + Nagel International AG. Among those attending the christening in person at the Container Terminal Altenwerder in the Port of Hamburg were Olaf Scholz, the Mayor of Hamburg, and Angela Titzrath, the CEO of Hamburg Hafen und Logistik AG.

“This naming ceremony is a symbol of the close connection to our home port, which is simultaneously the home port of the ‘Guayaquil Express’,” says Michael Behrendt, the Chairman of the Supervisory Board of Hapag-Lloyd AG. “For us, the ‘Guayaquil Express’ is a ‘smart ship’,” adds Rolf Habben Jansen, CEO of Hapag-Lloyd. “With it, we are setting an example of how we are efficiently positioning ourselves during these economically challenging times for our industry.” 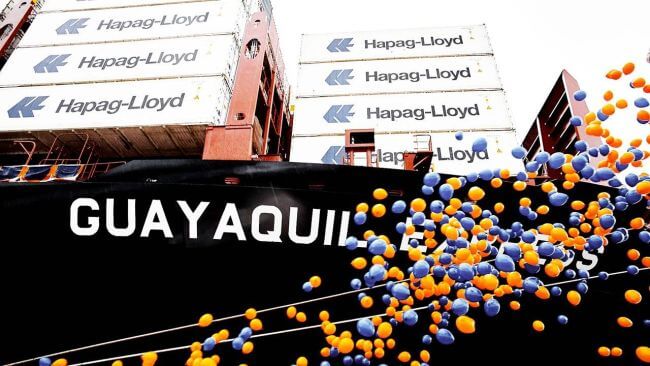 The “Guayaquil Express” was ordered in 2015, built by Hyundai Samho Heavy Industries in South Korea, and sails between Europe and South America. With a length of 333 meters and a width of 48 meters, the ship is designed for the new locks of the Panama Canal. With it, Hapag-Lloyd underscores its leading role in the Latin America trade. After merging with the container activities of CSAV in 2014, the company numbers among the market leaders in this trade.

By deploying the ship, rather than bringing any new tonnage into the market, Hapag-Lloyd is replacing two older vessels with each of the new state-of-the-art ones. As a result, significantly more efficient ships will be deployed between North Europe and South America West Coast without noticeably increasing capacity in the market. Like the “Guayaquil Express,” all vessels in the series are named after ports in South America as a sign of the close ties.

Each of the five new ships has 2,100 plugs for temperature-controlled “reefer” containers. This makes them particularly well suited for transporting perishable goods, such as fruits, vegetables, meat, fish or pharmaceutical products – goods that are exported from Latin America in large quantities. The vessels set the highest standards in environmental protection, and achieve especially low fuel-consumption and emissions levels thanks to innovative onboard technologies. They are equipped with a highly efficient main engine, an optimized hull shape and a novel lashing and loading system for a higher utilization.

All five newbuildings will sail under the German flag and are classified DNVGL. Their home port is Hamburg. A maximum of 19 rows of containers can be placed side by side on board the ships, which each have a maximum capacity of 123,500 tonnes. While the maximum draft is 14 meters, the distance from keel to superstructure measures 63.5 meters. The eight cargo holds and decks (nine tiers of containers can be stacked on top of each other above and below deck) offer a total capacity of 10,590 TEU.