Hanjin Heavy Industries has announced that it will construct 2 × VLGCs (Very Large Gas Carriers) in their Philippines Facilities for EXMAR, the Belgian integrated gas shipping company. The 80,000 m3 newbuildings will each be powered by an individual MAN B&W 6G60ME-LGIP Mk9.5 engine.

MAN Diesel & Turbo reports that the VLGCs have chosen LPG as a fuel option so they can comply with the new IMO sulphur-emission legislation due to enter force in 2020. Engine delivery to the yard has been scheduled for December 2019. Upon construction, the carriers will be chartered by Statoil. 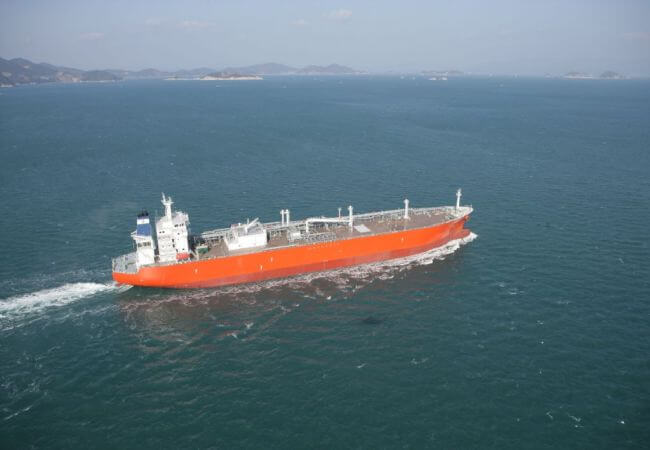 Bjarne Foldager – ‎Vice President Sales & Promotion, Two-Stroke Business at MAN Diesel & Turbo – said: “Interest in using LPG as a fuel, outside of the LPG carrier segment, is growing due to its sulphur-free character, free availability and ease of bunkering. In gas mode, we expect the ME-LGIP engine to operate on just 3% pilot oil and down to 10% load. Ultimately, we expect the engine to operate without the need for pilot oil.”

MAN Diesel & Turbo reports that the ME-LGIP engine has experienced a circa 10% reduction in CO2 and circa 90% reduction in particulate matter when running on LPG, compared with MDO.

LPG Test Facilities
With this commitment, LPG joins the list of liquid, environmentally-friendly fuels that can power MAN Diesel & Turbo’s portfolio of two-stroke, dual-fuel engines, which are available from all licensees. MAN Diesel & Turbo further reports that it expects ME-LGIP installation aboard merchant vessels to be extremely competitive price-wise, compared to other, dual-fuel-burning engine types.

LPG as a fuel
Due to ever more stringent emission limits, many LPG carrier operators called for MAN Diesel & Turbo to develop an LPG-fuelled engine that could power LPG carriers in the most viable, convenient and economical way using a fraction of the cargo already onboard.

LPG is an eminently environmentally-friendly fuel, in much the same class as liquefied natural gas (LNG), and an LPG-fuelled engine will significantly reduce emissions, enabling vessels to meet the stringent IMO SOx emission regulations due to come into force globally from 2020.

LPG’s future as a viable fuel for general marine transportation looks promising as it will not require as large an investment in infrastructure – such as bunkering facilities – in contrast to other, gaseous fuels. Accordingly, MAN Diesel & Turbo expects a strong demand for LGIP engines for very large gas carriers (VLGCs) and coastal vessels from their introduction.