In what could be seen as a culmination of an era marked with significant achievements, GSL today joined the elite class with the delivery of the 200thVessel. The delivery of the 200th vessel for the nation, synchronises with the handing over of the Third of the New 105 m Naval Offshore Patrol Vessel (NOPV) to be christened “INS SUMEDHA”, indigenously designed in-house and built by Goa Shipyard Ltd to the Indian Navy on 14th Jan. 2014.

The vessel is the largest Offshore Patrol Vessel of the Indian Navy and the largest constructed by Goa Shipyard Limited. The vessel will help meet the increasing requirements of the Indian Navy for undertaking ocean surveillance and surface warfare operations in order to prevent infiltration and transgression of maritime sovereignty.  This Vessel is suitable for monitoring sea lines of communication, defence of offshore oil installations and other critical offshore national assets. Besides, the Vessel can be deployed for escorting high value ships and fleet support operations. 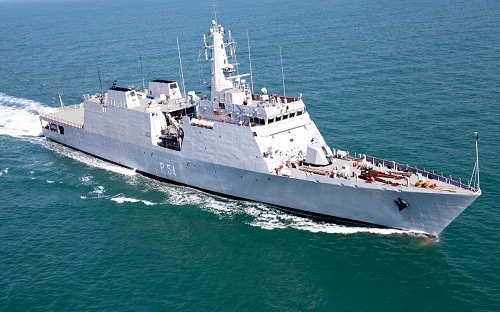 Noteworthy, to reinforce the country’s maritime defence, four Naval Offshore Petrol Vessels, (NOPVs) were contracted to Goa Shipyard Limited. The first and second of the series of New 105 meter class of NOPV “INS SARYU” and “INS SUNAYANA” were earlier handed over to the Indian Navy by GSL on 21 December 2012 and 02 September 2013.

As one of the few Indian shipyards equipped with an in-house design capability, GSL carries out its own Research & Development, in the process developing an in-house product range that efficiently meets the specific requirements of clients in the defence as well as commercial sectors in the fields of design, construction, repair and modernization of vessels. Most new shipbuilding projects at GSL are based on our own in-house design – the result of intensive R&D activity carried out over the years.

Goa Shipyard is implementing a major expansion plan that will significantly boost capacity of its shipbuilding facilities. The ongoing modernization project will augment GSL’s current capability to manufacture cutting edge warships. Once fully completed it will result in substantial enhancement of the shipyard’s capacity to fabricate steel, aluminum and GRP hull vessel to over three times its present capacity. The capability building is being developed to bolster India’s indigenous capability to build warships thus ensuring Maritime security.

Today, its track record for in house design, quality, reliability and rich experience, is well supported by sophisticated infrastructure that also includes a dedicated facility for repairs of commercial & defence vessels up to 120m, aided by its state of the art shiplift system of 6000 T capacity.