A Greenpeace activist has scaled the 155m long bulk carrier, Alppila, transporting coal to one of Finland’s most polluting power plants in central Helsinki. The coal ship and its climate-damaging cargo have now aborted its entry to the Port of Helsinki and now steam away from Helsinki accompanied by a Finnish coast guard vessel.

One activist made the climb up the side of the Alppila and was immediately detained by the crew onboard. Later, however, the activist managed to climb a crane onboard the coal ship and get to the grab. Greenpeace demands Helsinki to close its oldest coal-fired power plant and start the transition to completely renewable energy just like other Nordic capitals – Stockholm and Copenhagen – have already done.

The activists from Finland, Denmark, Austria and Spain set out in high-speed inflatables from the Greenpeace ship Arctic Sunrise at 4.30 (CET +1) this morning and one Finnish activist managed to climb onboard. As the crew onboard the Alppila physically detained the peaceful protester the remaining activists refrained from scaling the coal ship. The Arctic Sunrise is following the events close by. The bulk carrier has a transport capacity of 23,000m3 and was loaded in Ust-Luga, Russia 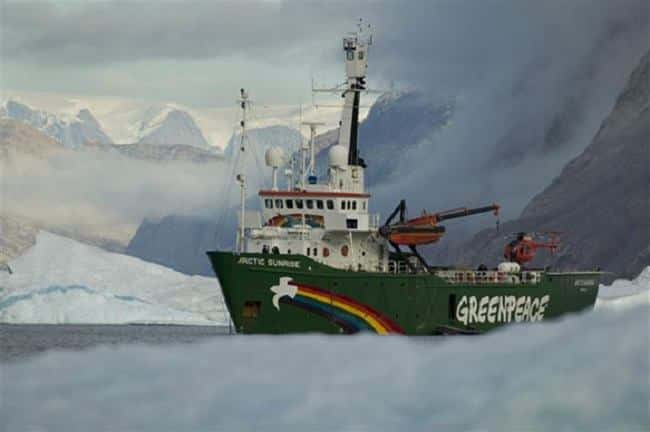 From the crane, Finnish activist Sini Saarela from Greenpeace Nordic said: “We must end the use of climate damaging coal. I want to stop climate change. Let’s start in Helsinki.”

A recent poll from TNS Gallup commissioned by Greenpeace found that a majority of the citizens in Helsinki want the city council to decide on closing down the Hanasaari coal power plant this year. 77% of the respondents want Helsinki to shift to completely renewable energy.

Almost half of the district heating in Helsinki is produced by black coal in Hanasaari and Salmisaari power plants. The two coal plants are responsible for nearly two million tonnes of carbon dioxide released to the atmosphere every year. The activists’ demand coincides with City Council of Helsinki deciding on the development of the city’s energy future later this year.

Greenpeace Nordic Climate and Energy Campaigner Laura Meller, said: “Right now, people all around the world are taking action to stop climate change so we can all breathe clean air. In Finland, this starts with closing down the decrepit Hanasaari power plant and starting the transition to renewable energy just as other Scandinavian capitals are already doing.”

“Political leaders around the world promise again and again that they will keep the world from catastrophic climate change. As the whole world is gearing up to the climate summit in Paris, starting the coal phase-out for real is a perfect chance to show that Finnish politicians are serious about these promises”, added Meller.