You are here: Home › Shipping News › Greek Owners Most Likely To Be Affected By US Sanctions On Iran – VesselsValue
TwitterFacebookLinkedInPinterestBuffer

A significant increase in trade volumes can be seen following on from the lifting of US sanctions in January 2016. A seasonal pattern can be observed in ton-mile exports post January 2016, with total volumes rising in the Autumn months in preparation for higher Winter demand. However, given the volatile nature of the Iran-US relations following on from president Donald Trump’s threats to amend and then kill the Iranian nuclear deal, it can be observed that there is a significant drop in total ton mile exports towards the end of 2017, below that of the same period in the previous year. 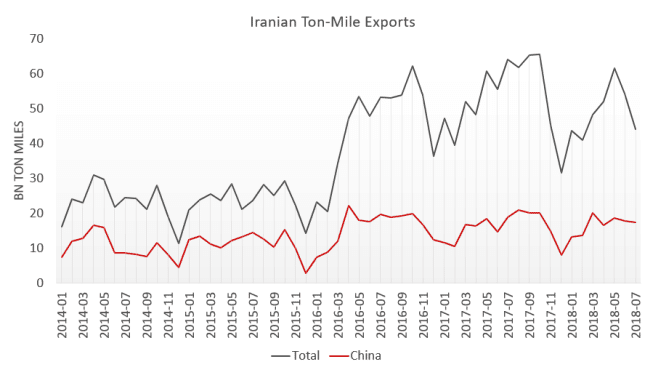 Within 2018, we can see that the seasonality pattern is not repeated and Iranian total ton-miles exports reach a peak by May 2018 in line with President Trump announcing his decision to cease the participation of the USA in the Iran deal and to begin re-imposing sanctions following a wind-down period. This may indicate the market is anticipating significant deterioration ahead, which falls in line with the ending of the 90 days grace period that expired on 6th August 2018 and the upcoming November deadline by which time US sanctions would apply to Iranian ports, shipping and energy sectors, as well as the provision of financial services, including insurance.

The largest export volumes from Iran have consistently been going to China, yet a significant drop off can be observed in December 2017, despite this Chinese imports rebounded thereafter and have been largely stable which falls in line with China’s declaration that it will ignore US sanctions and continue doing business with Iran. 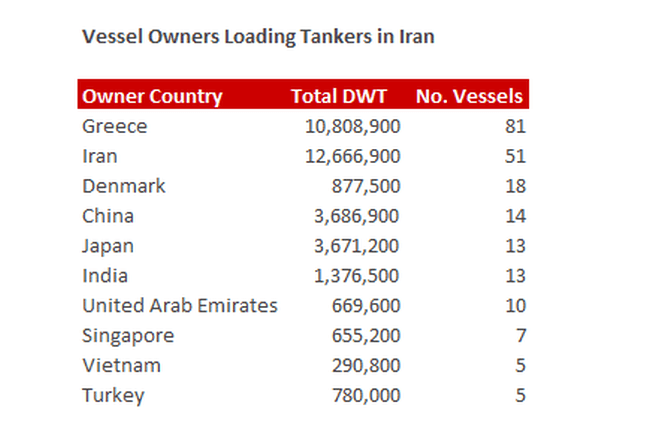 Greek owners still dominate exports, with 81 Greek tankers moving Iranian exports since 1st January 2018. Nonetheless, the Iranian owner NITC supplies the most tonnage for Iranian exports for now, this is likely to drop off after the last grace period ends in early November this year. The draw of higher freight premiums for Iranian business appears to be quite attractive thus far, particularly in relation to more conventional voyages out of the Middle East. However, it remains to be seen how much risk appetite remains as the sanction regime picks up speed midway through the fourth quarter of this year.

Oil Platform In Gulf Of Mexico Catches Fire, No Casualties

Damen’s Invasave Mobile BWTS Goes On Tour Ahead Of IMO Deadline
Want to share your tips and advice? Got questions? Visit the community forum to ask questions, get answers, meet people, and share your tips!