The Golden Ray salvage project at St. Simons Sound has been announced to be put on hold on Friday, 24th July 2020 owing to the impact of COVID-19 among the crew as well as the onset of the hurricane season. Operations are to resume next year.

All efforts to scrap the massive cargo ship that capsized on its side 10 months ago seem to never see the light of the day as this would be the 73rd time that weather conditions played obstacle to the removal project.

In September 2019, the Golden Ray fell on its side after losing stability right after departing Port Brunswick. The cutting operation is intended to slice the ship into 8 pieces using VB-1000’s gantry cranes. The cranes will utilize 400-ft lengths of chain to cut and lift the pieces to be transported for recycling at Lousiana. 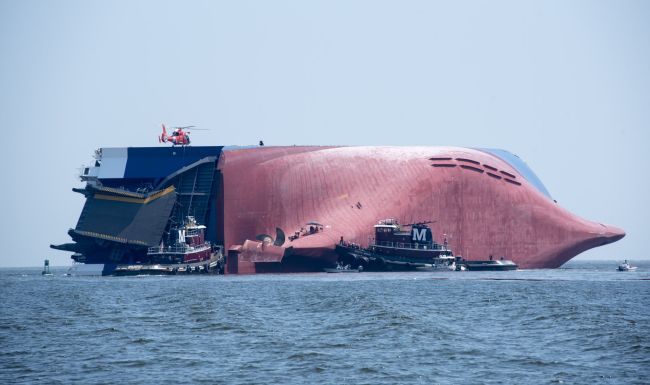 The announcement for the delay came after 10 of the 300 workers tested positive and over 50 been quarantined as a result of contact tracing. The members will now remain quarantined for two weeks and later be taken to a housing barge to stay in for the duration of the cut.

The cases made their way into the crew despite response protocols and discipline to limit exposure to COVID-19. This involved self-quarantine for the incoming crew, disinfection of facilities and platforms, face covers, and social-distancing as well.

John Maddox, State-On-scene Coordinator has maintained that the priority since day 1 has been “the safety of the public and all team members, and the preservation of the vast resources and beauty of St.Simons Sound”.

Adding to COVID-19, the Unified command also acknowledged the difficulties that might occur in the complex cutting and lifting operations during a hurricane season.

The decisions have however been criticized by some, who remain worried about the contaminants onboard. There contain approximately about 4000 cars and 44,000-gallon of petroleum, while the ship lies unnaturally on its side. Susan Inman, coastkeeper with the Altamaha Riverkeeper is skeptical about the future of the ship and wants the Unified Command to assess natural resource damage.

While operations remain suspended, a crew will remain to monitor the Environmental protection barrier (EPB) built around the vessel, along with the vessel itself. Permits have also been arranged to install moorings for the ship to stay in weather in case of severe weather.