Several international unions and the International Transport Workers’ Federation (ITF) general secretary, Steve Cotton, are in Melbourne this week to celebrate the 20th anniversary of the infamous Patrick Stevedores dispute, where dock workers were locked out of the waterfront in what was later determined to be an unlawful act.

Steve Cotton said today: “Twenty years on from the iconic Patrick dispute where hundreds of workers were locked out of their workplace for weeks on end, it seems ICTSI has learnt nothing. 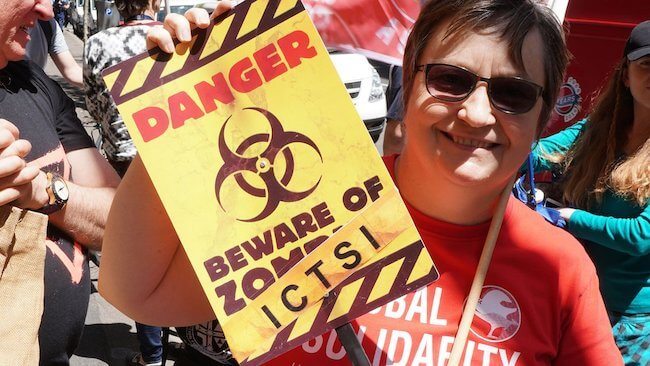 “The right of workers to join a union and collectively bargain was upheld then and the same applies now.

“Twenty years ago, we learnt that global solidarity between workers and their unions can make a difference with Patrick Stevedores eventually forced to reopen their gates and allow workers back on the job.

“Yet ICTSI continues to intimidate its workforce and strip every hard-fought benefit that has been built up over dozens of years of collective bargaining by unionised labour.

“The ITF has documented a pattern of labour rights violations from across ICTSI’s global network. Dock workers illegally sacked in Madagascar, workers paid poverty wages in Makassar, discriminating against union members in Melbourne, a worker fatally crushed in Jakarta.

“Unions in South Africa have publically opposed ICTSI’s entry into Africa, the world’s fastest growing port market. Unions protested today in Melbourne, with the ITF calling on ICTSI to end the exploitation of its workforce, targeting of trade unionists, and undermining of their rights across the company’s global operations.

“The ITF together with unions across the world, in every part of ICTSI’s global supply chain, will continue to campaign until ICTSI stops undermining the wages and conditions of its workforce.

“The Patrick dispute showed us the power of global solidarity. If unions across the world – including those in the United States, Europe and New Zealand – had not stood shoulder to shoulder with their Australian brothers and sisters we may well have seen a different result.

“We’ve learnt that lesson. The ITF, the newly amalgamated Construction Forestry Maritime Mining and Energy union, and our global affiliates stand in solidarity. We will tackle whichever operator we have to tackle, track whichever shipping company we have to track from any port, to pressure ICTSI to respect workers’ hard fought rights.

“The ITF is committed to working with port operators who provide good jobs, have good industrial relations practices at their ports and prioritise the growth of their business through the development of long-term, functional relationships with unions as their social partners.”