The ships are the largest ever built for the Royal Navy and the carriers are powered by GE’s energy-efficient, integrated full-electric propulsion system.

As part of the Aircraft Carrier Alliance, GE’s Power Conversion business has provided the HV Distribution system, HV Drives and Propulsion Motors as well as the Electrical Power Control and Management system. 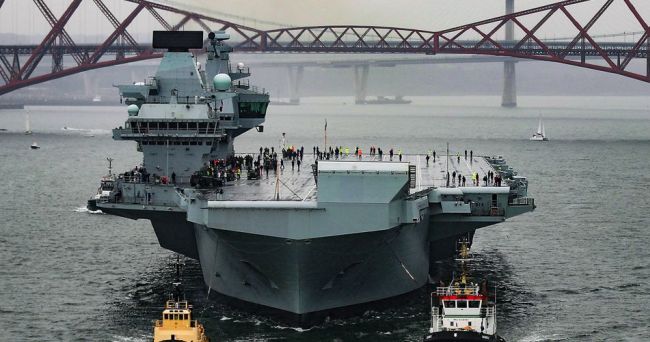 GE also supplied the HV Generators to support generating power for the entire carrier. Out of the 110 megawatts (MW) of power running through the system, 80 MW can be dedicated to GE’s energy-efficient electric propulsion motors – that’s how much it takes to move the 65,000 ton carriers. To put that into context, that’s the amount of electricity needed to power around 5,000 U.K. homes.

The Aircraft Carrier Alliance is a unique partnership between BAE Systems, the Ministry of Defence, Thales, and Babcock. Working together, the Alliance’s collective culture is one of an uncompromising commitment to trust, collaboration, innovation, and mutual support with all decisions taken on a best for program basis.

For almost three decades, GE has supported the Royal Navy with world-class technology. Today, the U.K. Royal Navy has more than 90% of its major ships operating with GE’s electric propulsion solutions, including HMS Queen Elizabeth, as well as the Type 45 destroyers, the new Type 26 frigates and the Royal Fleet Auxiliary’s Tide Class tankers.

GE is uniquely positioned to work alongside shipyards and world navies due to its extensive experience and capabilities. Thanks to the large scope of electrical and electronic equipment, GE is well suited to carry out the important architecture work, system integration and power management for navies.

Moreover, GE’s Marine Power Test Facility at Whetstone, England, is the world’s only commercial, land-based facility capable of full-scale testing of integrated electric propulsion systems for naval applications. Over the past decades, it has supported the world’s navies to de-risk the technology of current and future electric ship architectures.

“Our contribution to the U.K. Royal Navy has been extensive, supporting so many diverse naval ship classes. As the program for the second carrier, HMS Prince of Wales, nears completion, another important milestone has been achieved through the successful sea trial. Congratulations to the whole team – we are proud to serve the U.K. Royal Navy to deliver the operational readiness and confidence modern navies demand,” said Andy Cooper, managing director of GE’s Power Conversion business UK.

In addition, GE has provided systems for both aircraft carriers’ shore-based power supplies having recently installed and commissioned the motor and generator sets in Portsmouth. The large generator has a 16MW power rating, providing electricity for essential services when the carriers are berthed in harbor.