You are here: Home › Shipping News › German Bulk Carrier Detained After Crew Complain Of No Food, Bullying And Denial Of Shore Leave
TwitterFacebookLinkedInPinterestBuffer

The Liberian-registered bulk carrier “Anna-Elisabeth” has been detained by Australian authorities after international crew on board a bulk carrier complained of insufficient food, bullying aboard the vessel and denial of shore leave. 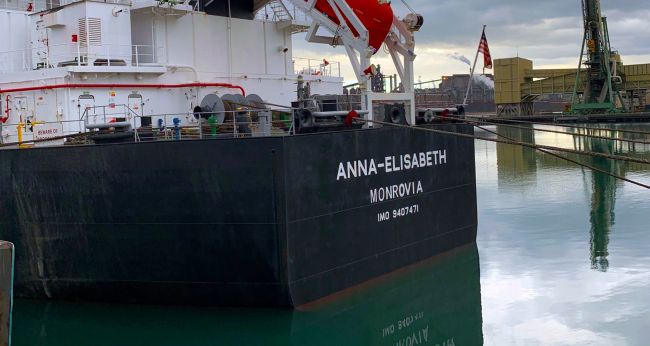 The complaints from on board the Flag of Convenience (FoC) vessel berthed at the Port Kembla Coal Terminal were received by the International Transport Workers’ Federation (ITF) on Monday 25 March and were immediately acted upon with an ITF Inspection conducted within two hours.

ITF national coordinator Dean Summers substantiated the crew’s serious concern finding inadequate stores on board and that crew had not had shore leave since 23 January in South Africa.

“Meat and fish were freezer burnt and fresh provisions were very low, certainly not enough to get 17 seafarers to Singapore. It is our suspicion that this company is under intense financial pressure and have sought to save money wherever they can. The master confirmed the food ration was $7 per day for all meals,” said Summers.

The ITF was also surprised to see that the company had a new crew category of “Deck Rider” on their crew list which immediately red-flagged the qualifications of all of the crew.

“We asked AMSA to confirm that the crew were qualified and safe to take the ship to sea. We have reports that this has become a major problem for this company now,” said Summers.

The ship was not permitted to sail by AMSA at the scheduled 6:00pm on Monday 25 March after ITF raised the alarm. Government inspectors were dispatched to the ship on Tuesday 26 March where a detailed inspection continued throughout the day.

The vessel was official detained by AMSA under the Maritime Labour Convention. The Liberian register is reportedly sending a representative to the ship to work with the master and owners to rectify the long list of deficiencies.

The German owners, Johann MK Blumenthal, are notoriously anti-union and have a reputation for confrontation.

“We are asking the Australian Government to send an urgent alert around the shipping world to audit and detain Blumenthal ships wherever breaches to human rights and workers’ rights are found. Clearly, the only thing these belly robbers understand is cost and profit,” said Summers.

“These kinds of breaches can only be systemic to this company and is certainly symptomatic of the FoC system that allows for exploitation and labour abuse of international seafarers.

“In recent weeks, ITF inspectors in Europe have uncovered other cases of food shortages on Blumenthal vessels. So right now, Blumenthal is a priority for the ITF, and we will continue to inspect their vessels in ports around the world to ensure that more than 700 seafarers across their fleet aren’t subjected to these exploitative practices,” concluded Summers.

This is the latest example of FoC shipping and the low water mark which now sets the standards in the Australian domestic trade. FoC ships dominate the Australian coastal trade and are at the centre of a dispute between maritime unions and BHP and BlueScope after the companies replaced the last two Australian-crewed bulk ships with foreign seafarers on FoC conditions.