Bunkering services were provided by the California-based company Clean Energy as well as Baker Hughes and Envent during a 48-hour period at the NASSCO shipyard in San Diego. Representatives from NASSCO worked collaboratively with several regulatory agencies to prepare for the event, including the U.S. Coast Guard, the American Bureau of Shipping, the San Diego Fire Department, and the Air Pollution Control District.

The Perla Del Caribe received 210,000 gallons of LNG which is nearly double the amount bunkered for its sister ship, the Isla Bella, the world’s first LNG-powered containership. The Isla Bella was built by NASSCO and delivered in October of this year. 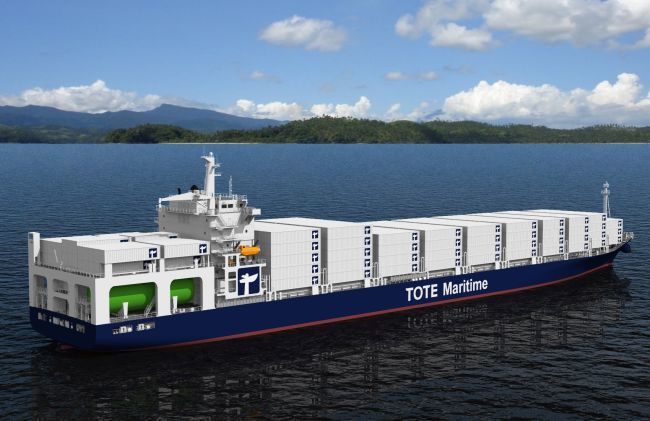 “This represents another milestone amongst many in the advancement of green, environmentally-friendly ship technology. This effort in particular demonstrates successful collaboration between industry and several regulatory entities, laying the groundwork for comparable green projects in the future,” said Parker Larson, director of commercial programs at General Dynamics NASSCO.

“As Captain of the Port of San Diego, I am grateful for the exceptional preparation and cooperation involved with this LNG bunkering operation,” said Captain Jonathan S. Spaner. “Indeed, these LNG-powered containerships are unique in our Nation and the world. I commend the team at NASSCO and all interagency partners for their efforts to ensure a safe, efficient, and successful bunkering evolution.”

Upon delivery, the Perla Del Caribe will join the Isla Bella for its trade route between Jacksonville, Florida, and San Juan, Puerto Rico. The containerships are part of a two-ship contract between NASSCO and TOTE, signed in December 2012.

Powered by LNG, this groundbreaking green ship technology will dramatically decrease emissions and increase fuel efficiency when compared to conventionally-powered ships – which is equivalent to removing nearly 16,000 motor vehicles off the road. The 764-foot long containerships will be the longest dry cargo ships powered by LNG – making them the cleanest cargo-carrying ships anywhere in the world.

As a complement to its government new construction business segment, NASSCO maintains an extensive history of commercial shipbuilding. In the past decade, NASSCO has delivered 13 commercial ships and currently has eight commercial ships in its backlog – with an additional ship, an Expeditionary Mobile Base, for the U.S. Navy under construction.

NASSCO is the only major shipyard on the West Coast of the United States conducting design, new construction and repair of commercial and U.S. Navy ships.